WILL THE US DOLLAR BECOME ANOTHER CASUALTY OF COVID-19?

The COVID-19 pandemic has presented governments around the world with the painful choice between shutting down their economies and letting many of their citizens die. The US has managed to choose a third option – “both of the above”.

In March of this year the US economy went into lockdown, and the US government expanded its 2020 deficit to a forecast USD $3.7 trillion (17.9% of GDP) in order to fund huge cash support payments to people and companies. (Its 2019 deficit was USD $984 billion, equivalent to 4.6% of GDP.)  At the same time, the US Federal Reserve cut the official cash rate to zero and went on a bond-buying spree in order to prevent a wave of bond defaults and corporate insolvencies. 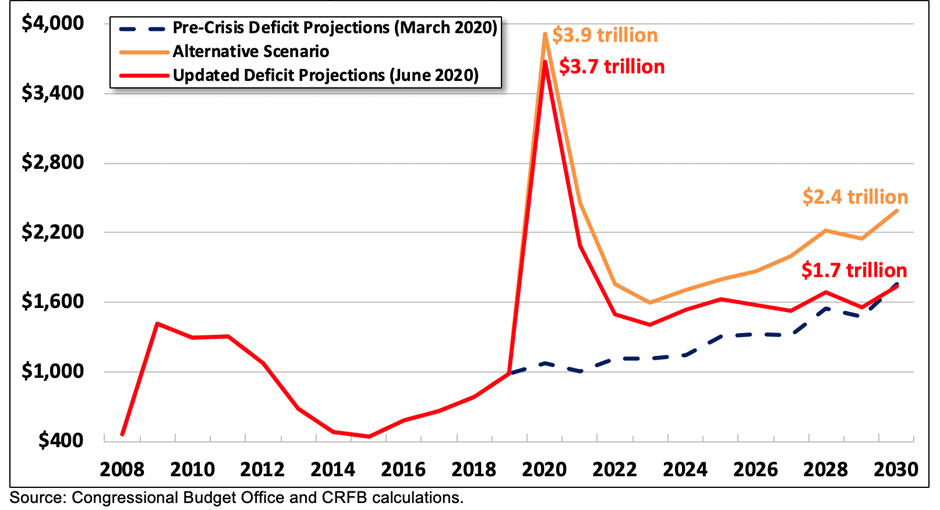 Many US States, however, decided to exit their lockdowns before they had their COVID-19 infections under control, as well as disregarding the need for masks and social distancing. As a result, coronavirus infections have escalated, particularly in the South and West. The US is now leading the world in infections (3.9 million) and deaths (141,000). Its nearest rivals – Brazil, India and Russia – have Third-World health care systems which are incapable of recording the numbers of infected patients, let alone treating them.

2020 will go down in history as the year in which the US managed to have the worst of both worlds: the deepest recession since the 1930s, and an unnecessarily high COVID-19 death toll. There is no sign that either catastrophe will end soon.

These twin disasters will have consequences for investors. The direct consequences of COVID-19 have already affected the US economy and will eventually affect the US share market. If the US keeps on failing to control COVID-19, the US economy will be seriously damaged, either by the next million deaths or by the renewed lockdown which will be needed to prevent them. In this case, the US will undergo a longer and deeper recession than any other developed country. Global investors may want to keep their US tech stocks, but they are likely to shift some of their equity investments to countries which have better economic prospects because they managed to control COVID-19, e.g. Europe, Japan, or Australia.

The indirect consequences of COVID-19 flow from the monetary and fiscal stimulus which has been used to offset the employment and business effects of the recession caused by the shutdown. US government debt will reach 100% of GDP later this year, and will soon beat the previous record of 106.1% in 1946 (caused by World War II) as seen in the below graph. The US economy will not be back to 2019 levels before 2022 at the earliest. And the Federal Government will still be running a trillion-dollar deficit then, irrespective of who the President is. Not surprisingly, investors are wondering exactly how this mountain of debt is going to be reduced.

Gross Federal Debt as a % of GDP

The Trump Administration cut taxes and increased the government deficit. Right now, it seems to be hoping that economic growth will increase the tax take. The Democrat platform for the Presidential election in November emphasizes that tax rates will be increasing for corporations and “rich” people. But the platform also includes some serious spending plans, especially on infrastructure, health care and renewable energy. In short, the next President is not going to be able to reduce the US government debt burden in the next three years. 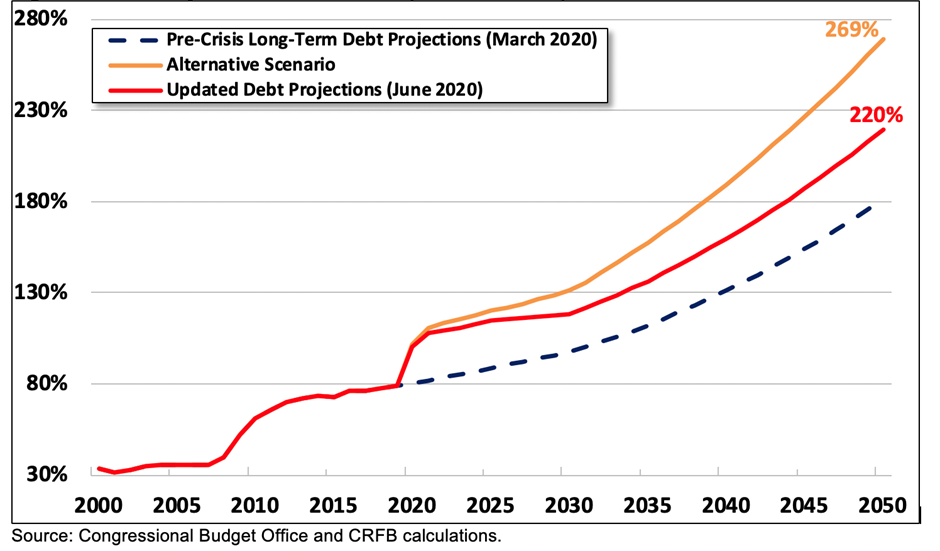 What the next President can do, however, is reduce the real (post-inflation) value of the debt burden. Four years of moderate inflation, say 5% per annum, would cut USD $4 trillion off the current total debt outstanding of USD $20 trillion. Right now, the economic boost given by the 2020 fiscal and monetary stimulus is feeding inflationary pressures into the system. In particular, the corporate and individual support payments put cash directly into the bank accounts of companies and people, unlike the GFC stimulus which went mainly to the banks’ balance sheets and stayed there.

Now that both Republicans and Democrats have abandoned any pretence of trying to balance the Federal budget, it will be tempting for the next President to keep the current stimulus going, albeit at a lower level. The early stages of inflation generate prosperity for much of the population, and central banks from Frankfurt to Canberra have been trying to push CPI inflation above 2% ever since the GFC.

THE US DOLLAR IS GOING TO FALL

We summarise the three main reasons why we expect the USD to fall against most major currencies:

HOW FAR WILL THE USD FALL?

For the sake of completeness, we measure the USD’s movements in terms of the US Dollar Index (DXY) which compares the USD to a basket of six currencies, the Euro (EUR), the British pound (GBP), the Japanese yen (JPY), the Canadian dollar (CAD), the Swedish krona (SEK), and the Swiss franc (CHF). The value of the DXY since 1986 are shown in the chart below. 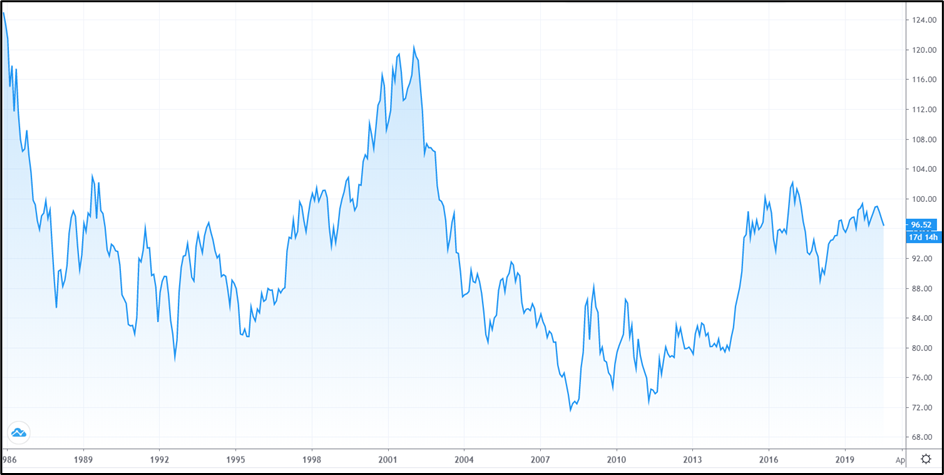 The size of the fall in the USD against other currencies will depend on the economic conditions in each country and how that country chooses to manage its exchange rate. The Chinese government, for example, is likely to hold the renminbi around the current level of 7.0 to the USD.

WHAT SHOULD INVESTORS DO?

We emphasize that we are not talking about the decline of the US or the rise of China or any other geopolitical events. We are simply saying that the USD is in for another period of weakness, and that investors should adjust their portfolios accordingly.

We recommend that Australian investors reduce their exposure to Australian companies which derive a large part of their revenues in US dollars, such as the global healthcare groups. The rise in the Australian dollar (AUD) against the US dollar reduces the AUD value of USD profits.

Australian investors should also reduce their exposure to the broad US market. The AUD has fallen by -44.7% to March 2020 against the USD since its peak of $1.10 in July 2011, boosting the AUD value of US equities. This effect is about to go into reverse.

There is a good case for retaining selected US technology stocks, such as Apple, Amazon, Alphabet (Google), Facebook, Microsoft, and Netflix, because of their competitive advantages. There is also a case for holding US multinational companies which derive the bulk of their revenues outside the US, because this sort of company enjoys a degree of inherent currency hedging. But we expect that multi-nationals based in Europe or Japan will perform better, particularly because European and Japanese share markets are cheaper than the US share market.

A fall in the USD does not automatically mean the US share market will fall. It did fall when the USD fell in the 1970s and the early 2000s, but this time around there are other factors at work at the national and international level. It is quite possible that continuing US monetary and fiscal stimulus in the next couple of years will propel US shares higher. For example, the USD may fall at 5% per annum while the S&P500 is rising at 10% per annum, giving investors a net gain of 5% per annum. In this case, however, investors will do better in share markets where the local currency is a tailwind rather than a headwind, i.e. where the local currency is rising against the USD.

The fall of the USD will stretch out over the next few years, and will not occur at a constant rate. We will update our investors as it occurs, along with watching the rise of US inflation.