WARNING SIGNS IN THE US

Since the GFC, the world’s central banks have got into the habit of publishing regular Financial Stability Reports (FSR). These documents are intended to function as an early warning system, by monitoring financial markets in order to identify risks as they appear and grow, so that the regulators can take action before the crisis actually occurs – unlike in the GFC.

The US Federal Reserve publishes its FSR twice a year, and many investors read each FSR not only to assess the current risk level but also get see what the Fed might do next. The May edition is just out, and it identifies two serious risks.

The first risk is the high level of corporate gearing. The amount of nonfinancial corporate debt outstanding currently totals USD$9.7 Trillion. (For comparison, US GDP in 2018 was USD$20.5 Trillion.) Since the GFC, business debt has grown faster than GDP, with the result that the ratio of business debt to GDP has risen to historically high levels. In particular, companies with high gearing or low credit ratings have borrowed more, and so they have become even riskier. 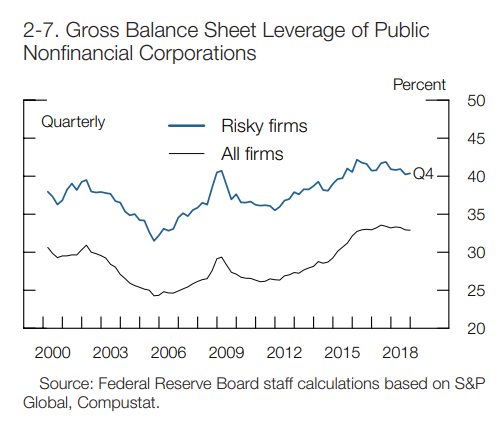 At the same time, the average quality of company debt has deteriorated. Slightly more than half of investment-grade bonds issued by nonfinancial companies are rated at the lowest two levels above junk. Even if there were no defaults, any negative surprises – let alone a recession – would cause many of these bonds to be downgraded, tipping them into the junk category and forcing some bondholders to sell immediately. There are currently USD$1.9 Trillion worth of these low-rated bonds on issue, so a string of defaults and fire sales would be painful for the US economy.

The second risk is the high valuations of US equities. Many commentators (including Arminius) have pointed out this risk, which covers many different valuation measures. Rather than re-hash these arguments, we focus on the chart below, which compares global share prices with forecast global earnings per share growth. It is obvious that the 2019 rebound in world share markets has moved share prices a long way ahead of fundamentals. That is, most of the rebound was due to a change in sentiment, rather than to improving fundamentals. 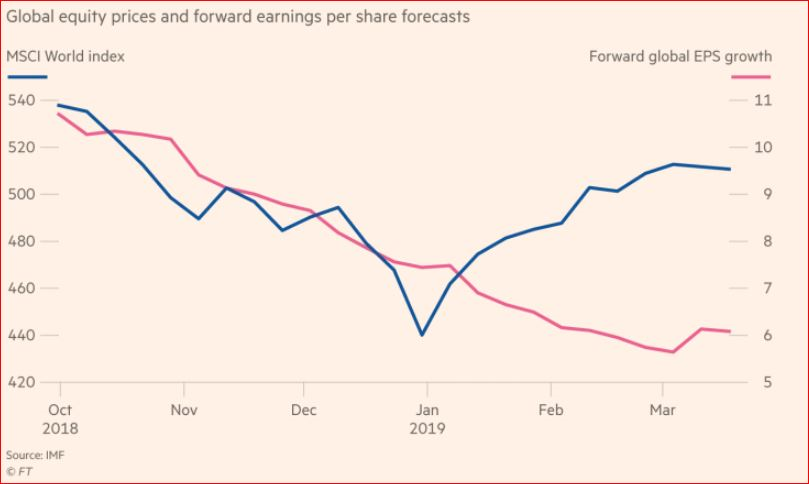 The FSR notes that risks are low in other parts of the US financial system. Since the GFC, household debt has grown more slowly than GDP, with the result that household gearing has fallen. Mortgage delinquency rates remain low, partly because mortgage underwriting standards have been tightened. House prices have increased in recent years, but the ratio of price to rent is close to its long-run average and well below its pre-GFC levels. In short, there is no danger of another housing crash in the near future. 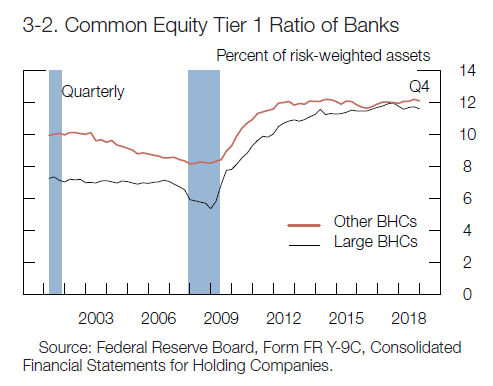 For much the same reasons, the risks in the banking sector are low. Banks have been forced to raise more equity in order to strengthen their capital bases, their balance sheets are now subject to close regulatory oversight, and their lending practices have been tightened. The FSR chart above shows how the US banks’ Common Equity Tier 1 (CET1) ratio has nearly doubled since the GFC.

Arminius always emphasizes the lessons of history, and one of the most important is that financial crises are not rare events – they turn up about once a decade. They are all caused by unsustainable trends in the economy, but the trends are slightly different every time. The GFC was the result of debt-funded rises in US house prices which led to a housing crash, and the collapse in the value of housing loans led to a banking crisis.

The next US crisis, by contrast, will start in the nonfinancial corporate sector, when companies start to default on their bonds and their bank loans. The warnings in the FSR match up with the trends which we have observed in US share markets and US corporate borrowing. The next US crisis – perhaps as early as 2020 – will be amplified by the large amount of low-quality corporate debt and the expensive share market.