The financial world was shaken by three seismic tremors during September 2019, but most people only noticed one of them.

The one that everyone noticed was the drone attack on Saudi Arabia’s oil processing plant at Abqaiq on 14 September. The Yemen-based rebels who claimed responsibility have launched more than one hundred drone attacks in the last two years, on Saudi oil facilities such as oilfields, pipelines, and pumping stations, as well as military bases, airports, and other infrastructure.

What was surprising about the Abqaiq attack was the painfully high ratio of damage to cost. Ten cheap drones managed to slash Saudi oil production for some weeks. By “cheap”, we mean that these drones were not the US Raptor or Predator models which cost $5 million-odd each. The Yemeni drones were much cheaper, because they were constructed using 3D printers, with Iranian guidance electronics added. (Iran has been supporting the Yemeni rebels throughout their four-year war against the Saudi-backed government of Yemen.)

The Saudi government was unable to prevent the Abqaiq attack even though it spent USD $67 billion on defence last year, second only to the US and China, but even more than Russia. This failure reinforced the widespread view among diplomats that Saudi Arabia is a theme park run by the US for the benefit of the Saudi royal family.

The first question that oil markets asked was, “How long until full production can be restored?” The second question asked was, “How long until the next attack?” The Abqaiq attack marks the arrival of asymmetric unconventional warfare in global oil markets. This is a type of guerrilla warfare where locals use low-tech devices such as IEDs to harry an occupying power. It is this type of warfare that has kept the United States trapped in Afghanistan for the last eighteen years – the longest war that the US has ever fought.

Past wars between OPEC states – such as Iran and Iraq in the 1980s – included low-level harassment of each other’s oil tankers, but oil revenues were so important to both sides that harassment never escalated into all-out war. The Trump Administration, however, changed the rules of the game when it imposed sanctions designed to cut Iran’s oil exports to zero and force regime change. Now that the US has raised the stakes, the Iranian government has nothing to lose from attacking US proxies such as Saudi Arabia.

The second event took place in the US money market. On 16-17 September the repo rate suddenly spiked from 2% to 10%. The repo rate is the market interest rate which is determined by supply and demand of overnight cash, mostly traded between very large banks and very large corporations. Because the time period is so short and the quality of collateral is very high, this rate is almost always very close to the official cash rate, which the Federal Reserve had set in the range 2.00-2.25%. Hence a spike in the repo rate suggests that there is a shortage of cash to lend because something has gone wrong with one or more of the big players in the market – the last time the repo rate spiked like this was during the GFC. 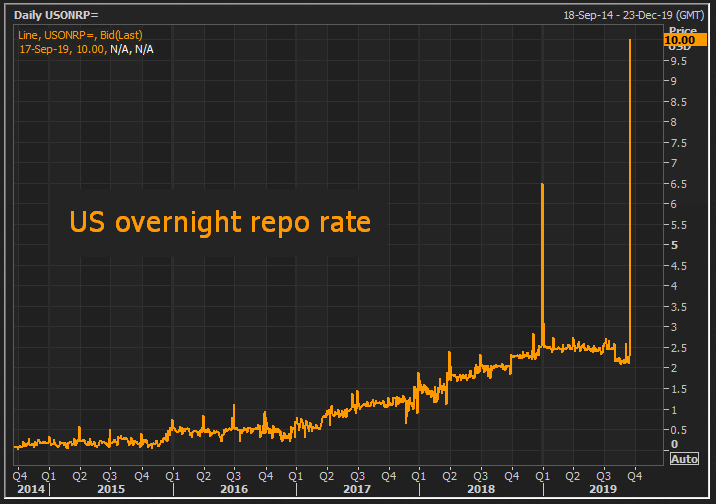 The US Federal Reserve (“the Fed”) promptly shovelled cash into the repo market, in the same way as it does when it publicly delivers truckloads of cash to bank branches in order to head off a bank run. The repo market slowly settled down, and the players and the regulators tried to work out what had just happened.

The immediate cause of the cash shortage was said to be large tax payments by US corporates at a time when bank liquidity was seasonally tight (because of end-of-quarter window dressing) and US Treasury bond sales had pulled more cash out of the money markets. The Fed had not foreseen this sort of problem because US bank reserves held at the Fed stood at USD 1.4 trillion – surely adequate to meet any cash drawdown, as higher repo rates would normally encourage banks to pull their cash out of the Fed and put into the repo market. On this occasion, the banks’ cash stayed where it was.

The Fed is now considering how it should change its regulation of the repo market to avoid a repeat of the cash shortage. While this matter seems like a very technical problem of financial plumbing, it is worth remembering that when household plumbing fails, there is no water. If financial plumbing fails, there is no credit, and companies start going bankrupt.

The third event was a momentum crash which occurred in the US equity market but spread to Europe and Japan. Let us explain. In the wake of the GFC, US share markets have risen fairly steadily, with few corrections, and the leaders in this rise have been the big tech stocks such as Facebook, Apple, Netflix, and Google. Since 2009, US investors have been able to triple their money just by following the uptrend. Finance theory calls this sort of trend-following “momentum”.

Then, over two days in early September, the momentum trend suddenly reversed – that is, there was a momentum crash. The tech stocks which had been leading the trend dropped sharply, and bond prices also fell (i.e. bond yields rose). Daily moves of this size are extremely rare: the last one occurred in February 1999 during the dotcom bubble.

Conversely, the stocks which had been lagging behind the market suddenly outperformed, particularly the boring banks and cyclicals. The size and speed of this reversal put many portfolios into the red for the month of September, and the effect was magnified for derivatives based on the momentum stocks.

Even though the momentum stocks regained some of their lost ground later in the month, the net result is that a wide range of leveraged private investors, hedge funds, and bank trading desks have had a very bad September, calling it the “Quant Quake”. What is surprising is that no one knows exactly why the reversal occurred. The geopolitical situation hadn’t changed suddenly, the central banks were quiet, and The Donald’s tweets were no weirder than usual. Now the big question in investors’ minds is, “Was the momentum crash a one-off, or does it signal a change in the investment climate?” We will discuss the “Quant Quake” of September at greater length in the Arminius Capital ALPS Fund September Report which will be published during October here: https://arminiuscapital.com.au/funds/

September’s three seismic tremors were not catastrophic events on the financial equivalent of the Richter scale, but they were completely unexpected, their causes are still unclear, and their implications are not good. We have described them as seismic tremors because major earthquakes are usually preceded by seismic tremors. Three in the space of three weeks suggests that there is more bad news out there, just waiting to happen.