The US share market is the biggest in the world, accounting for 60% of total market capitalization. (The Australian share market is only 2%.) Therefore, when investors in the US are getting scared, the rest of the world sits up and pays attention.

The chart below shows how investors have become increasingly worried about the outcome of the next US Presidential election. The VIX (for “Volatility Index”) measures investor fear by measuring how much investors are willing to pay in order to buy option protection against downside risk in the US share market. Investors can buy or sell futures contracts on the VIX index. Each futures contract has a specified maturity date in every month. The higher the price of buying a futures contract, the higher the perceived risk that the market will fall before that month’s contract matures.

Mapping the prices paid for VIX futures in each of the coming months allows us to draw a “maturity curve” which records the level of market risk which investors perceive for each month. In normal times, the maturity curve is fairly flat. After a sharp fall in the US market – as in February and March this year – volatility goes up and the whole VIX curve rises.
In the last six weeks, the maturity curve of the VIX has developed a sharp kink around the futures contract which matures in November. This is the contract which provides protection against a fall in the US market after the Presidential election. Worse yet, the kink is getting sharper and the whole curve is rising. 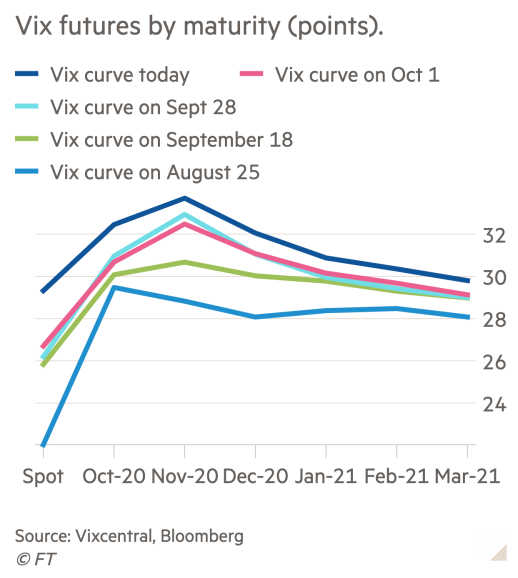 Why are investors worried? Because the US Constitution mandates that a President is elected not by winning the popular vote, but by obtaining at least 270 of the 538 votes in a strange beast called the Electoral College. Each State has the same number of Electoral College votes as the total numbers of its Senators and Members of the House of Representatives. Including the Senators (two for every State) favours the less populous States, meaning that it is possible for a candidate to lose the popular vote but still win the Electoral College, and hence become President.

This disjunction has happened in five elections since 1788 – 1824, 1876, 1880, 2000, and 2016. The 1824 and 1876 elections were particularly acrimonious, with the result that on both occasions the selection of the President devolved to the House of Representatives for three months. If the election is contested, the procedure becomes very complicated and the outcome becomes very uncertain.

As Arminius Capital has been pointing out for some months, a contested election is very likely unless one candidate wins a clear majority of both the popular vote and the Electoral College. Passions were already high even before the recent events (below) which are witnessing the descent into pulp fiction political theatre:

Republicans, Democrats, and constitutional lawyers have been war-gaming the possible scenarios around a contested election. An unclear outcome on the night of November 3rd leading to months of protracted uncertainty may be a win – for those holding long VIX positions.

On Wednesday 20 January 2021, someone will be inaugurated as the 46th President. Investors don’t really mind who it is – what worries them is that two men might turn up expecting to be inaugurated.