The Bank of Japan’s regular Financial Stability Report helps Arminius update our investment view on Japan. Because the country has suffered very few coronavirus deaths, the Japanese economy will recover very quickly from the lockdowns in the first half of this year. Consensus forecasts are for GDP to fall by -5% in 2020, but to rebound with +3% growth in 2021. Most importantly, the average Japanese company carries very little debt – many have a net cash position. Corporate Japan’s leverage to the East Asian economies will cause a sharp improvement in profits. Therefore we recommend maintaining a high exposure to the Japanese share market.

Despite having the world’s highest percentage of elderly people, Japan has handled the COVID-19 pandemic remarkably well. Deaths to date have totalled only 1,706, out of 96,000 cases. 36 million of Japan’s 126 million people (28%) are over the age of 65, but the Japanese aged care system managed to protect them. If Australia and its 25 million people had done as well as Japan, then our total deaths would have been 181, rather than the actual figure of 905.

Japan had the advantage of pandemic preparedness. After the SARS scare from China in 2002, the health authorities drew up a full set of precautions and responses, which the Japanese bureaucracy duly put into effect when COVID-19 appeared. The Japanese bureaucracy is used to operating efficiently while politely ignoring the notional leadership of incompetent and short-lived ministers, so the government of Prime Minister Abe did not need to do very much. As it turned out, most of what the government did was ineffective, confused, or merely embarrassing.

Another advantage in combating the pandemic is that Japanese society is courteous, hygienic, and diligent. Ever since SARS (China, 2002) and avian flu (H5N1 from China, 1996), visitors to Japan could see that about 15% of pedestrians, shoppers and commuters were wearing masks at any given time. When COVID-19 struck, most Japanese observed the guidelines about social distancing, sanitization, and self-isolation, so the coronavirus had fewer opportunities to spread. 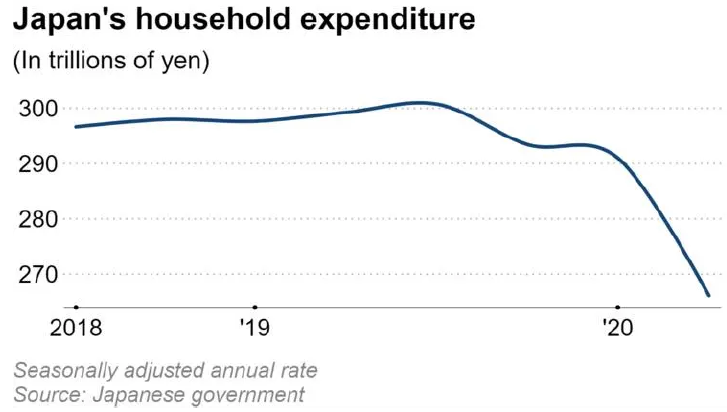 Because online shopping is not yet popular in Japan, the lockdowns sent retail spending into a power dive, as the chart above shows. After GDP falls of -2.3% in the March quarter and -7.9% in the June quarter, the Japanese economy is already recovering. Fortunately, unemployment was only 2.2% in early 2020. The consensus of forecasters implies that GDP will drop only 5% in 2020, then rebound 3% in 2021. The recovery will be boosted by holding the postponed 2020 Olympics in July-August 2021.

The corollary of the collapse in retail sales is households’ piling up their unspent cash, as shown in the chart below. This cash will eventually translate into retail spending, which we expect will be unleashed next year (provided that there is no recurrence of COVID-19). 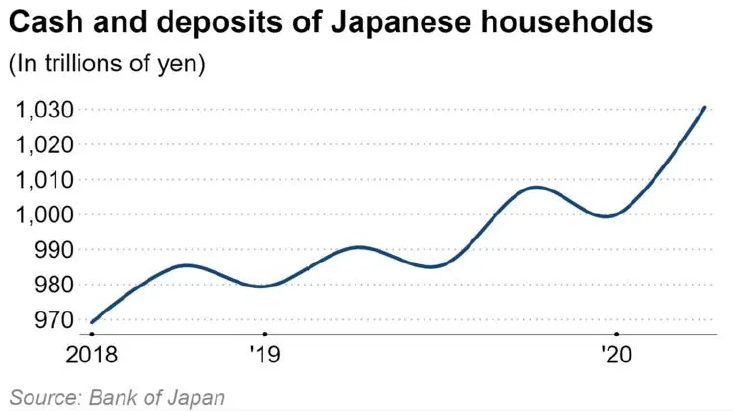 The important role which Japanese companies play in China allows the Japanese share market to benefit from the rapid recovery in China. In terms of exports to China as a percentage of home-country GDP, Japan is beaten only by South Korea, Australia and New Zealand. For the last forty years, Japanese companies have been among the major foreign investors in China, both as suppliers to the Chinese market and as part of their own global supply chains.

What are the risks to Japan’s economic recovery? Japanese government debt is notoriously among the largest in the world, currently equivalent to 240% of GDP. But Japanese bond yields have been negative since 2016, so servicing this debt is not a problem. There is no risk of a run on the bonds, because some 90% of Japanese government debt is held by Japanese investors. And Japan is the world’s largest creditor, with more than $4 trillion of overseas assets. (More than China, but the Japanese prefer to be modest about such things.)

Most importantly, the Japanese corporate sector carries very little net debt. Companies do borrow, but they also let cash accumulate on their balance sheets, because they are not under pressure to increase dividends or do share buybacks. Before COVID-19, 59% of Japanese companies in the Nikkei 225 had more cash than borrowings. The comparable figure for the US was only 14% of S&P500 companies.

Although there have been very few Japanese corporate insolvencies this year, the Bank of Japan is worried that an anaemic economic recovery might trigger a wave of defaults in corporate bonds, particularly among the riskier mid-sized companies which have been kept alive by emergency loans and government grants. If so, corporate credit costs would rise.

The Bank of Japan is confident of the strength of the largest banks, and expects problem loans to be concentrated in specific sectors – commercial property, aircraft financing, and global project loans. The Bank is also concerned that several of the 70-odd regional banks may be at risk, because they have weaker balance sheets and questionable overseas exposures. The new Prime Minister has committed himself to assisting these smaller banks and to promoting mergers.