House prices and housing starts have been falling since early 2018, but there are recent signs that they are bottoming out. Optimists believe that the Reserve Bank’s two interest rate cuts plus changes in the banks’ prudential requirements will stimulate demand, prompting a recovery in 2020. We are more pessimistic: although house prices are cheaper now than they were two years ago, they are not cheap compared to household incomes, especially when real wages remain flat and many households are already carrying high levels of consumer debt.

Resources account for nearly two-thirds of Australia’s exports. The biggest are iron ore, LNG, metallurgical coal, and thermal coal. The main buyers are China, which took 32% of our exports last year, Japan (10%), South Korea (5%), India (4%), and the US (4%). Hence the health of our exports depends on Chinese economic growth.

GDP growth in China has been slowing down for years, and will keep slowing

The official Chinese GDP growth target for CY19 is “above 6.0%”, so that is what the figure will be. (Extensive academic research says that official growth rates are overstated by about 2%.) The slowdown is partly caused by official policy: the central government has cut back on the massive investment spending which led to industrial overcapacity, bridges to nowhere, motorways that collapsed, etc. In the last two years the central government has also restricted debt growth, which has affected the private sector worse than the public sector. BHP CEO Andrew Mackenzie has just warned shareholders not to expect an increase in Chinese steel production in 2020. 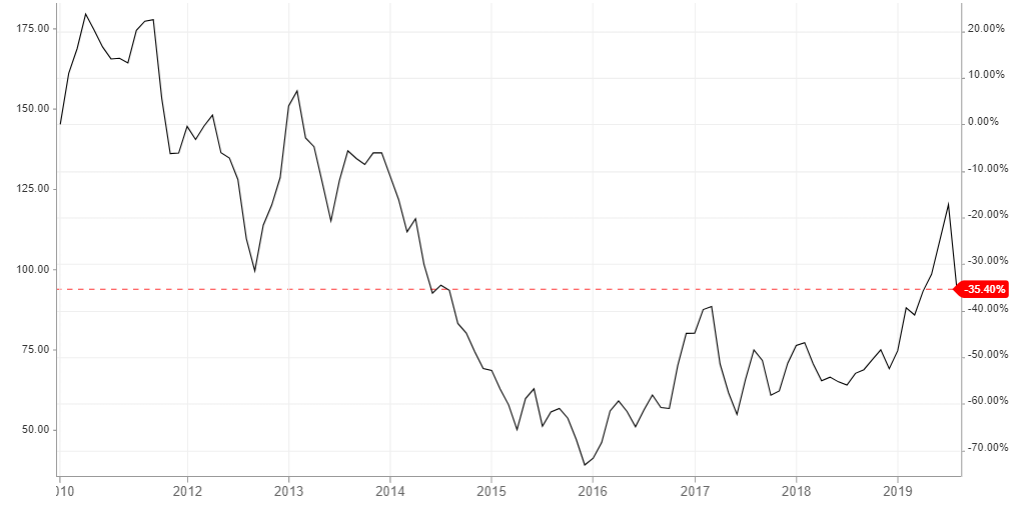 In 2019 the Chinese slowdown was masked by the rising iron ore price, which was caused by the latest tailings dam disaster in Brazil. The January 2019 shutdowns of Brazilian production left the global iron ore market about 5% undersupplied. BHP, Rio, and Fortescue also suffered weather and other constraints on their Pilbara production, so as the chart above shows, the average iron ore price spiked from USD$75 per tonne in January to as high as USD$120. This spike was very pleasant for the Australian producers, but it ended in August when Brazil’s closed mines began to re-open. The price is now back around USD$90, and is forecast to settle back below USD$80.

Metallurgical coal and thermal coal are having problems in China. Since January, Australian coal imports have been suffering an undeclared “go slow” at key Chinese ports. Each shipment now takes forty-odd days to get through customs, more than twice the usual time, and these delays are not being applied to other countries’ coal. The Chinese authorities have declined to explain the issue, sticking to bland official remarks about “the need for environmental and safety checks”.

There is a clear parallel with Chinese restrictions on Canadian imports such as pork, soybeans, and canola oil, which were imposed immediately after the Canadian legal system pounced on the daughter of the founder of Huawei. Coincidentally, Australian coal started to be checked right after the Australian government announced that Huawei would be excluded from its 5G system. Now we know how a mouse feels when a cat is playing with it.

Will a US recession affect Australia?

The US is important to Australia because the US makes up 24% of world GDP, compared to China’s 17%. Australia is popular with the Trump Administration because we buy more stuff from the US than we sell to the US, i.e. the US runs a trade surplus with Australia. But the US buys only 3.6% of Australia’s exports. The UK, by the way, accounts for only 1.4% of Australia’s exports, coming into our list of export markets at a sleepy number 14 (we export more to Vietnam than to the UK) which is why we can enjoy the spectacle of Brexit as pure farce, with minimal economic impact on us.

Will there be a property crash?

Eventually but not immediately. The office and industrial sectors have their own cycles of supply and demand, and at present they are healthy. Shopping centres, by contrast, are suffering the effects of online retailing, and will need to re-price and re-design before their rents and values can increase.

Residential property has had a modest price correction, but more importantly, the fall in housing starts has reduced the over-supply in Sydney and Melbourne for the time being. The history of housing cycles tells us that it will rise again in a couple of years.

So no recession, then?

Only if there is a major global disaster such as a financial crisis in China, or an escalation of the US-China trade war. In these circumstances, Chinese demand for Australian exports would fall sharply and commodity prices would drop. The exact timing of this kind of event is not predictable until it starts to unfold.

Unfortunately, the possibility of either or both of these events is high at present, which is why Arminius recommends keeping your investment portfolio defensively positioned.

Generally, we are recommending to wholesale investors holdings such as: