The table above shows how the S&P500 index has performed under Republican and Democratic Presidents since 1928. (Source: Wall Street Journal 03 Nov 2020, with data from Dow Jones Market Data.) Republicans don’t do as well as Democrats, but much of the underperformance is due to Herbert Hoover, who was president during the 1929 Crash and the start of the Great Depression. Data from earlier periods (1871-1928) does reduce the size of the Democrats’ averages.

The central point is that the US share market rises under almost all Presidents, regardless of their party. If investors stay invested, they will make money in the long term. Like every other politician in the world, Presidents are at the mercy of macroeconomic and demographic events which they cannot control. Most Presidents have little understanding of these events, so their policy responses range from adequate to ineffective to simply bizarre.

Presidents’ policies, however, can affect returns in individual stocks and sectors. For some months, brokers have been putting together recommendation lists on the basis of the policy differences between Trump and Biden. There is an important caveat: a President may be unable or unwilling to implement some of the policies which he or she had previously announced.

THE NEXT FEW WEEKS

First of all, President Trump remains President until 12 noon on 20 January 2021. Because a Presidential transition is far more complex than just moving into the White House, the handover is likely to be difficult given the hyper-partisan environment. The choice presented to American voters in 2020 was a difficult one: 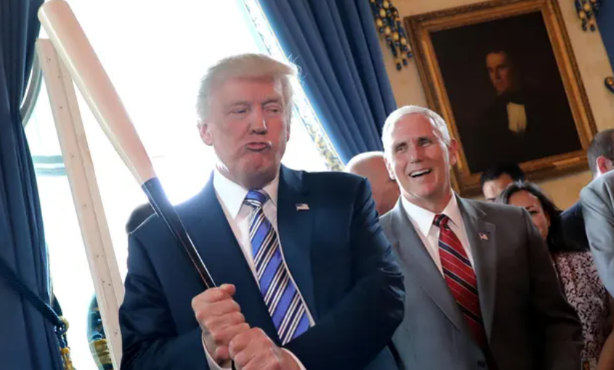 Is this The Donald preparing to meet with Biden’s transition team? 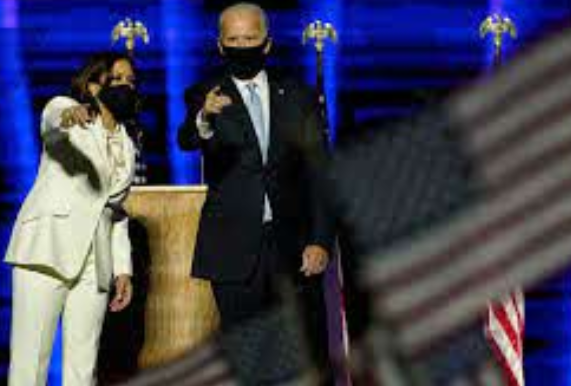 Every US President has an immense range of powers under “executive actions” – Presidential orders which do not require Congressional votes. The easiest things for President Biden to do are a string of executive actions rolling back President Trump’s Presidential orders. Many of these have already been signalled on the Democratic platform.  A recent article in The American Prospect summarized “the 77 policies for which Biden need not ask permission”. They include:

The increase in spending on environmental problems and renewable energy will improve revenues for companies in these sectors. Caution should be exercised, because the potential increases in profitability may be already priced in.

There are several areas where the Democrats and Republicans are already more or less in agreement. The most obvious is China. 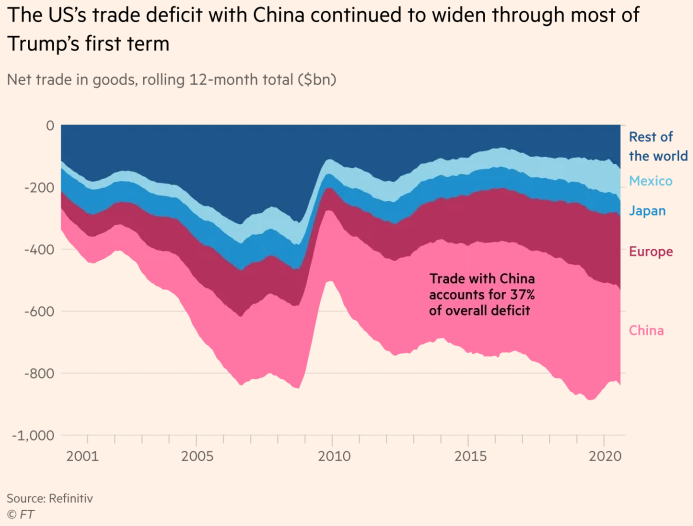 Biden’s US approach to China is only likely to differ from Trump’s in style, rather than in substance. Over the last two years, it has become obligatory for all US politicians to declare that they will be “tough on China”. Even State and municipal candidates, who have absolutely no impact on US-China relations, have been eager to establish that they are not panda huggers.

The Democrats have announced USD350bn worth of legislation to encourage Federal agencies to buy US products, to support US R&D in science and technology, to strengthen US medical and pharmaceutical supply chains, to uncover Chinese influence operations abroad, and to punish China for its human rights violations in Xinjiang. Various Republican legislators have proposed similar policies. Biden has committed to retaining Trump’s tariffs for the time being, saying that they will be “re-evaluated”. More importantly, Biden has said that he will build an active alliance against China by re-engaging with the many countries which China has bullied; these countries may have been ignored by President Trump since 2016.

The Democrats have announced a USD1.3tn plan to rebuild America’s ailing infrastructure, focusing on green projects such as charging stations for electric vehicles. The boost to electric vehicles would be positive for companies which mine and process the minerals used in electric vehicles batteries. Implementing the infrastructure plan will depend on how projects are allocated to individual States and congressional districts, because of the “pork barrel” implications for local representatives. The projects that get through Congress will be less green than the Democrats want, but they will still be broadly positive for the railroad, construction, and building materials sectors.

The Democrats have committed to pursuing anti-trust actions against the tech giants, starting with Google, Facebook, and Amazon. So have the Republicans, with slightly different emphases. Eleven Republican States joined with the Department of Justice action against Google announced in October. Coalitions of Attorneys-General from the other States are mounting separate actions on various grounds.

The antitrust action against Google (Alphabet) is narrow but strong, based on the same laws and cases which forced Microsoft to a settlement with the Department of Justice in 2001. Social media companies such as Facebook, Twitter, Snapchat and Pinterest may have to make some alterations to their business models, but regulation is not necessarily a bad thing for the incumbents in an industry, because it can be used to entrench their competitive positions.

The social media companies could live quite comfortably with some form of government oversight and standard-setting in areas which are currently causing them embarrassment. Mark Zuckerberg of Facebook has said that he would welcome a consultative form of regulation, to assist the company in meeting community standards for free speech, privacy, and the use of personal data. Amazon will be more resistant to regulation, in view of the many complaints about its anti-competitive practices. But Microsoft’s experience with US and European regulatory authorities shows that a modus vivendi can be reached.

Even though the pandemic has demonstrated the inadequacies of the US healthcare system, there will be little change. The Biden Administration will be able to improve public health funding, but any attempts at reform will meet broad Republican opposition.

A genuine attempt to tighten regulation on Wall Street was never a high priority for a Biden Administration, and the hostile Senate will be used as an excuse why it can’t be done in the near future. Of course, this delay is totally unrelated to the fact that many of Biden’s biggest donations come from Wall Street.

The President can use executive actions to impose higher environmental standards on oil and gas producers, but the Senate is unlikely to accept very much of the Democrats’ push for more investment in renewable energy. The Democratic platform sets 2050 as the target date for 100% clean energy, and its planned measures to reach this target include: supporting renewables, introducing a carbon tax, ending fossil fuel subsidies, and not granting new leases for drilling offshore and on Federal land. As the chart below shows, the oil price has far more effect on the health of the oil and gas sector than any President. Given that the market value of the oil and gas sector has fallen 50% this year, the bad news is probably already priced in. 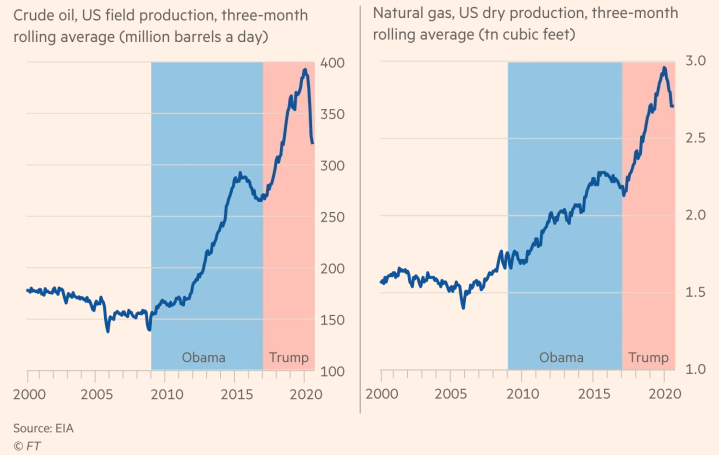 WORKING WITH A HOSTILE SENATE

We assume that the Republicans will have a slim majority in the Senate. This is a serious constraint on Biden’s freedom of action, but it is not as serious as some commentators have claimed, because a Majority Leader can only encourage – not enforce – voting discipline on his party’s Senators.

The most important thing to bear in mind about Senators is that each of them has his or her own groups of potential supporters, starting with the voters in their State but also including lobby groups and donors. The varied nature of these groups means that a given Senator’s motivations may not have much in common with other Republicans.

Senators also have six-year terms, which means that they are less focused on short-lived issues than members of the House of Representatives are. Whereas Presidents serve for eight years at most, Senators face no term limits, so they often serve for thirty or forty years. But because their elections are State-wide, most Senators need to raise large amounts of money at each election – therefore big donors are very important.

Republican Senators in safe Republican States can ignore Democrat voters. Their main enemies are in their own party, because they can always be unseated in a party primary vote. In the last decade several incumbents fell victim to insurgents who had the backing of Tea Party activists or Trump loyalists.

By contrast, Republican Senators in swing States have to keep the party faithful happy so as to fend off Republican rivals in the primary, but they also have to avoid taking extreme policy positions which might alienate swinging voters in the State election, who could support their Democratic opponents instead.

The combination of these factors means that Senators of either party do not always vote the way their President or their Majority Leader wants. Mitch McConnell was in fact one of the main reasons why President Trump got so little of his platform into legislation. Any proposal which Mitch didn’t like (e.g. term limits) or which might damage the electoral position of his Senators (e.g. infrastructure, the border wall) was simply not put before the Senate. His Democrat predecessor, Harry Reid, did exactly the same with Obama.

In short, a persuasive President can use a combination of sticks and carrots to induce key Senators to vote for his measures. LBJ and Reagan both accomplished this trick several times, but the requisite skills have been lacking in the White House in recent years.

Meanwhile, President Trump will remain active on Twitter – the Twitter that will continue to arbitrarily ban, cancel, “fact” check or delete many of the President’s tweets – criticizing Biden’s policies and personnel, while continuing to insult all and sundry. His tweets will appeal to his diehard loyalists, so many Republican legislators will try to stay on his good side, or at least to avoid adverse attention. But ex-Presidents have no power, so practical politicians will be focused on their interests and views of their actual and potential supporters, i.e. voters and donors.

2021 “should” hold less surprises in store for the American voting public and the US stock market than 2020 has presented. Given the unprecedented monetary and fiscal stimulus enacted by the Federal Reserve and the Trump Administration respectively, corporate America appears to be closing out 2020 on a high. We expect H1 2021 to continue the exuberance borne of the clarity of the 2020 election result and the long expected outcome of Operation Warp Speed, the “miracle” vaccine – brought to market only mere days after the US election was held. H2 2021 will be representative of the incoming Administration’s effectiveness of persuading the population that they can do a better job of managing the virus than their predecessors did. In order for this to be achievable, the vaccines must do the job the drug manufacturers say they can – otherwise the V shaped recovery (in the real economy & in the stock market) of 2020 will morph into a W.