PREPARING FOR THE CHINA CRISIS

After a decade of pointing out that China was not heading for a financial crisis, we have changed our minds. Recent trends suggest that problems are building in China’s corporate bonds, small banks, and consumer loans. We think that a crisis is likely in the next two years.

Ever since the GFC, predicting economic disasters in China has been a popular pastime in the US. Various short-sellers claimed that soaring Chinese house prices meant that China would eventually imitate the US housing crash, or that rising Chinese debt implied that China would suffer its own subprime loans crisis. More exotic predictions included the collapse of the Chinese currency, the faking of Chinese foreign exchange reserves, the imminence of a “hard landing”, and so on.

Obviously, none of these predictions were fulfilled. It was equally obvious at the time that none of these predictions were made by anyone who had a comprehensive knowledge of China’s economy and government. It is difficult for most Westerners to understand that China is nothing like a Western country. It is run by the Chinese Communist Party (CCP) for the welfare of the Chinese people, as defined by the Chinese Communist Party.

Recent trends in the Chinese economy point to four important areas of vulnerability:

China’s debt burden is now equivalent to 300% of GDP – higher than Greece, the US, or Japan. Half of the debt is held by non-financial corporates, i.e. private and State-owned companies excluding the banks. The rest is split almost equally between government, households, and the banking system.

The number and size of bond defaults is increasing. According to the ratings agency Fitch, in 2018 45 companies defaulted on 117 bonds with a face value of 110 billion renminbi (about USD $16 Billon), more than three times the 2017 value. 90% of the bonds by value were issued by private companies.

Despite the surge in defaults, it is not possible for China to have a “Lehman Day” – like 15 September 2008, when the giant US financial services group Lehman Brothers was suddenly declared insolvent, letting loose a free-for-all of litigation over its assets, which is still wending its way through US courts. The US government was forced to step in and provide sufficient cash for Lehmann to pay its largest creditors (other banks, of course!), otherwise US and European banks would have been falling over like dominoes.

China can’t have a Lehman Day because China’s insolvency laws are not like Western insolvency laws. In short, creditors have no rights. In addition, Chinese judges are appointed by the Communist Party and they do what the Party wants. The Chinese government has heard of judicial independence, and it’s not having a bar of it.

The fate of an insolvent company is determined, not by an administrator and a creditors’ committee, but by a committee dominated by representatives of the local government and the Party. The purpose of this committee is to preserve jobs and economic activity. Hence only small and unimportant enterprises are put into liquidation; bigger ones are restructured so that they can stay in business. Creditors – even the State-owned banks – always have to accept large haircuts on their debt, and usually have to swap their loans for equity in the new enterprise.

For Chinese corporate bonds, the potential problem is not a string of disorderly insolvencies cascading through corporations. It is the danger that there will be so many defaults that bond holders will begin to worry about the safety of most bonds on issue.

In the US, this sort of panic started in the mortgage securities market in the June quarter of 2007, then spread to other classes of asset-backed securities later in the year, and finally spilled over into the overnight repo market in 2008. Essentially, the prices and transaction volumes of fixed interest securities shrank rapidly because traders began to worry – first about the underlying value of the securities, then about whether their counterparties were solvent, i.e. whether they could settle the trade. It was this level of panic which forced the US Treasury and the Federal Reserve to intervene by visibly propping up all the major banks.

In theory, the Chinese regulators – the People’s Bank of China (PBOC) and the China Banking and Insurance Regulatory Commission (CBIRC) – can prevent panic in the bond market by simply following the procedures which the US regulators employed to handle the GFC. In practice, there are many ways they could screw up, starting with the fact that they have never had to deal with this sort of crisis before. In addition, the US is not a good model, because it was slow to act and badly co-ordinated. At the onset of the GFC, the US regulators were a long way behind the play. The Federal Reserve did not admit that there were problems in the bond market until January 2008, and the US Treasury had ideological objections to supporting the banks – until after Lehman Day, when the consequences of inaction became painfully clear.

In summary, many countries have successfully defused bond panics and banking crises, but many have failed too. There is no guarantee that the Chinese regulators will get the formula right, or that they can convince their political masters to act fast enough.

The banking sector has always been subject to levels of control (not just supervision, actual control!) which are inconceivable in the West. The regulators exercise very tight control over the six big State-owned banks, which account for nearly 40% of loans, and over the dozen or so large private-sector banks, which account for about 15% of loans. The Communist Party has always taken the view that banks exist in order to serve the people. Shareholders barely rate a mention.

The regulators set annual quotas for loans, approve the size and shape of capital raisings, vet directors, and appoint CEOs. Any signs of weakness at these large banks would bring immediate State intervention, therefore runs on large banks are unlikely.

The shadow banks, which are the unregulated dark twins of the large banks, have been the target of an aggressive crackdown since early 2017. The regulators have been clipping the wings of the shadow banks – e.g. mandating better capital backing, eliminating flawed products, cracking down on malpractice, reducing inter-bank lending, and jailing billionaires.

One of the main purposes of the crackdown was to reduce the potential for contagion in the banking sector. Chinese depositors quite sensibly prefer to deposit their savings with one of the big six banks, whose safety is unquestioned. The big six have got into the lucrative habit of lending out their spare cash to smaller banks and shadow banks, who find it harder to attract deposits. Typically, a small bank can fund less than 60% of its loans from deposits, so the rest must come from the wholesale and inter-bank markets, where interest rates and volumes can fluctuate wildly. Therefore small banks are exposed to interest rate shock and liquidity shock.

Apart from the shadow banks, there are some 4,000 legitimate regional and local banks which account for around 40% of banking system assets. Many of these small banks have long been run for the effective benefit of local governments or local businessmen. 420 of them received a “Fail” rating in China’s first stress tests on banks, according to PBOC’s 2018 Financial Stability Report. Although the bank regulators have increased their supervision of these problem banks, they simply do not have the powers or the resources to monitor them closely. Hence it is possible that a series of insolvencies in a particular region or industry would lead to a surge in bad loans in multiple banks. The bank regulators could easily find themselves with more bushfires than they can put out.

The third area of vulnerability is consumer credit. A decade ago, this form of credit was minuscule, because most banks were unwilling to extend unsecured credit to individuals in any form. As the chart below shows, by 2018 consumer loans had passed RMB 36 trillion, equal to 40% of GDP, including credit card debt of RMB 6.3 trillion. It is the fastest-growing form of debt, and is particularly attractive to consumers who don’t qualify for bank loans. Residential mortgages still account for more than half of household debt, and the majority of borrowers have comfortable loan-to-valuation ratios. Consumer credit, however, is new, different, and not well regulated. 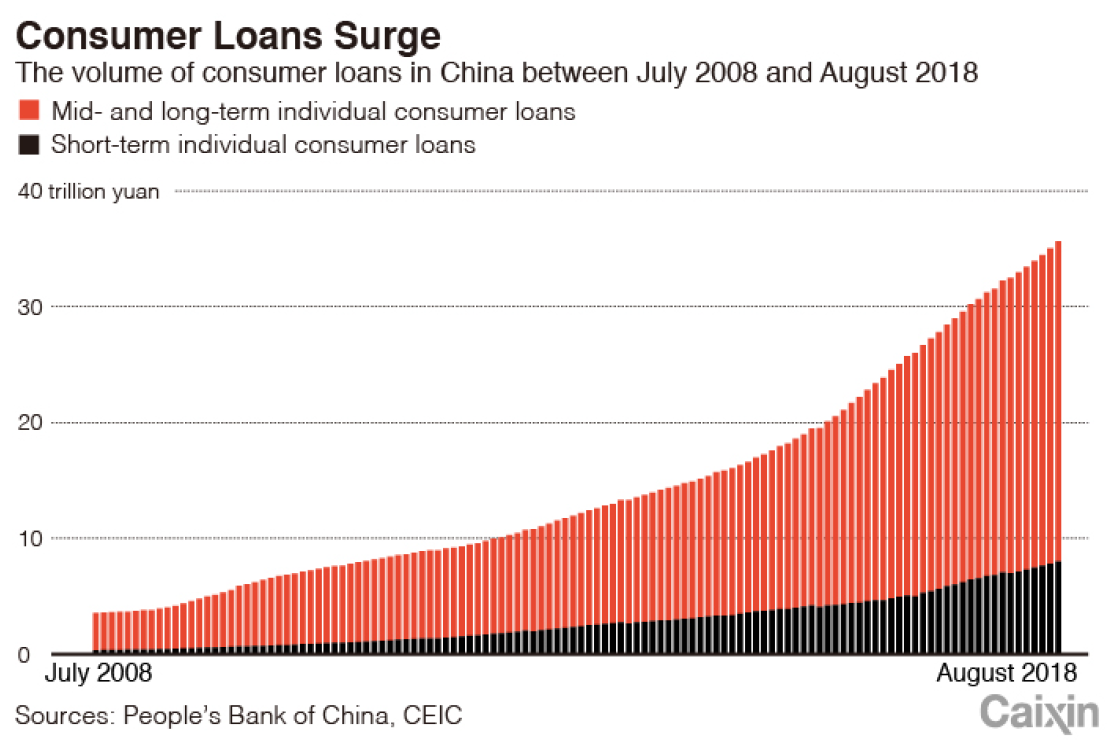 Few providers of consumer credit have rigorous methods of assessing customers, and even fewer are any good at chasing delinquent borrowers. Part of the problem is that China has very little law relating to debt collection, either to protect consumers or to define lenders’ rights. Not surprisingly, most bad debts are sold to quasi-legal collection agencies, who use various forms of harassment, public shaming, and violence.

Perhaps the best example of how the consumer loan business might go wrong is China’s unfortunate history with online person-to-person (P2P) lenders. Because the national regulators are understaffed at the best of times, they assigned a low priority to this species of internet-based finance, dumping responsibility for P2P lenders in the lap of local governments. As a result, P2P lenders blossomed in unlikely places, and by November 2015 there were more than 3,500 of them, backed by over 4 million individual investors. They were, however, very small – the aggregate value of their loans was less than RMB 1 trillion, i.e. less than 1% of total bank loans. Since then, most of the P2Ps have gone bust, or simply vanished with the money, and fewer than 1,600 remain. The central government has turned a very cold shoulder to the unfortunate investors who lost money, sending its riot police in to break up their rallies. The government’s lack of sympathy seems to be based on two facts: the P2Ps did not benefit from mis-selling by banks or state organs, and the number of people affected is too small to worry about.

Consumer credit is potentially a much larger problem than P2P, because it has loans of RMB 36 trillion to over 100 million borrowers. In addition, the majority of consumer credit has come from banks and other recognized lenders. It is easy to see how consumer credit could become a widespread problem.

The renminbi exchange rate and the size of China’s foreign exchange reserves are indicators of problems elsewhere in the economy, rather than problem areas in their own right.

Since the 2015 slide in the renminbi, the Chinese central bank (the People’s Bank of China, or PBOC) has got onshore trading in the renminbi firmly back under its control. The key to this control is to keep a very tight rein on capital flight. Officially, the ordinary Chinese citizen is only allowed to send overseas a maximum of USD 50,000 per year, but many citizens have found ways around this limit.

Since 2016, PBOC has not only enforced this limit very strictly, but it has also prohibited individuals from investing in overseas property, imposed tight controls on banks’ foreign exchange transactions, carried out stringent checks to prevent stealthy capital exports by means of over-invoicing, and set restrictions of the type of overseas assets which companies can buy.

As a result, China’s foreign exchange reserves have been stabilized at USD 3.1 trillion, and the downward slide of the renminbi has been checked. But the offshore renminbi will always carry a degree of risk, because it is the visible symptom of problems within China. Investors who want to sell their Chinese bonds or equities will also sell their renminbi.

The slowdown in the Chinese economy adds to the risk that a crisis could start in one or more of the four areas of vulnerability. Even if the US and China agree to halt their trade war, the underlying problems in China will not go away, and current government policies are focused on reinforcing Party control over the economy. This will not end well.