Back when coins were originally made out of an alloy of silver and gold it was uncommon but not impossible to debase one’s currency. The death penalty as a consequence of currency debasement seemed to inhibit the practice. The Lydian Empire in 700 BC (before they fell to the Persians) lays claim to inventing “coinage”. Once the use of coins as a medium of exchange became commonplace, the Greeks were known to debase their currency from time to time. The Romans of course (in order to fund large wars or for natural disasters – beginning to sound familiar?) perfected the art. Currency debasement goes by many names and methods, amongst which “sweating” and “clipping” were popular. These days, the world’s central banks and Treasury Departments are performing this role and the eventual result is becoming clearer: inflation.

The chart above shows US consumer price index (CPI) inflation for the last sixty years. For those of us who can remember the 1960s and 1970s, history seems to be repeating itself.

In the 1960s, the US government steadily increased its annual budget deficit in order to pay for the Vietnam War and new social programs. Consumer price index (CPI) inflation rose modestly at first, then it took off in the 1970s as a result of three key events – Richard Nixon ended the gold convertibility of the US dollar, OPEC quadrupled oil prices, and global commodity prices rocketed up. Inflation continued to accelerate despite the efforts of three US Presidents, until Paul Volcker (Chair of the Federal Reserve 1979-1987) raised official interest rates to a record 20% per annum in 1981.

This time around, the Trump and Biden stimulus packages have injected an unprecedented amount of money into the US economy to combat the virus, at a time when the Federal budget deficit had already passed one Trillion dollars and US government debt was rapidly approaching 100% of GDP. These factors are inflationary in their own right, and they are reinforced by the imbalances which the COVID-19 pandemic has created in the US economy. 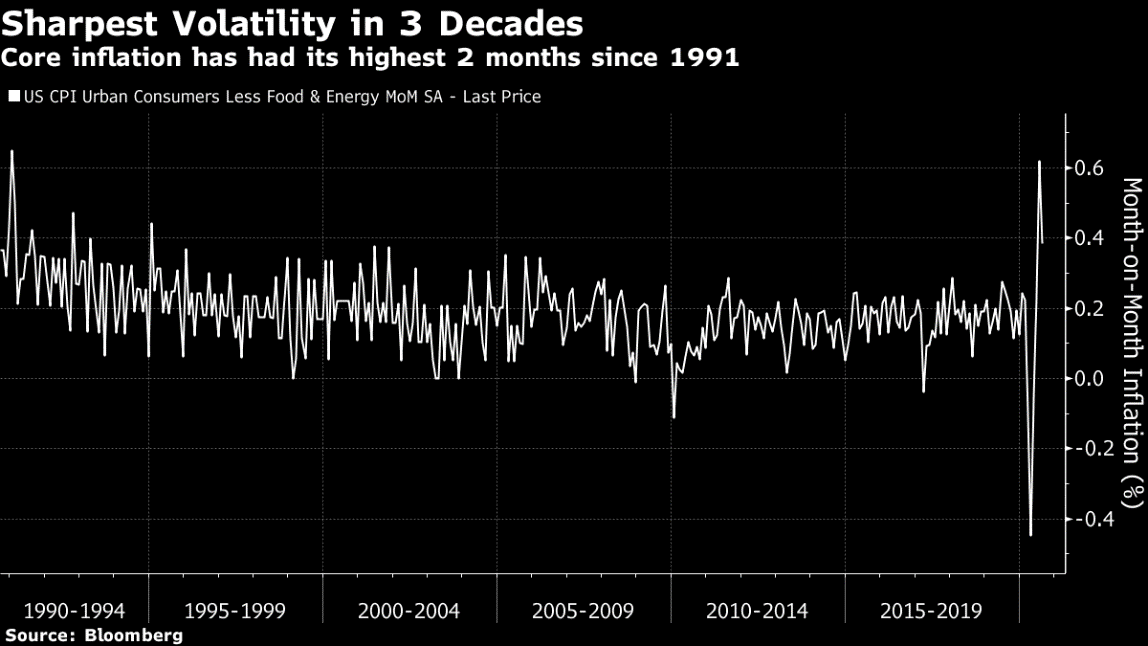 The chart above shows US inflation on a month-to-month basis. For the last three decades it has been pretty stable, with no big monthly moves up or down, producing an annual average inflation rate of about 2%. Then in early 2020 the onset of the coronavirus pandemic triggered lockdowns, which set off a sharp deflation, followed by a sudden rebound in consumer demand and in CPI inflation.

Is this inflationary surge just a temporary side-effect of COVID-19, or is it the beginning of a longer-term trend? We think that the US is about to see higher inflation – above 3% per annum by year end-2021.

Inflation will rise in the US because the Federal Government’s support packages have created an estimated USD$1.6 Trillion of “excess savings” in the bank accounts of US consumers – money which they were unable to spend on their usual activities like restaurants and travel.

At the same time, the rapid recovery from the pandemic has caused supply bottlenecks in many sectors, from electronic goods to cars to housing. A shortage of cargo ships and containers has raised freight costs and delayed delivery dates. A shortage of builders and skilled labour has raised new house prices and slashed the number of houses for sale. The consumer goods giants Kimberley-Clark and Procter & Gamble have already announced across-the-board price rises, on the grounds of rising raw materials costs and higher transport expenses. Coca-Cola has recently announced price increases of the globally consumed beverage, citing identical reasons – higher commodity prices. Coke’s CEO James Quincey this week stated, “We intend to manage those intelligently, thinking through the way we use package sizes and really optimize the price points for consumers”. In true corporate-speak, by “optimize”, he means “increase” the price points for consumers in order to offset Coke’s increased production costs.

Most importantly to observe, is that it is the prices of many commodities – from copper to iron ore to corn – that have risen sharply in recent months. The chart above shows the Bloomberg Commodities Index (BCOM) for the last thirty years. The last resources boom is clearly visible, peaking in March 2008, followed by a 75% fall over the next twelve years.

The index has risen 47% from its bottom in April 2020, but it still has plenty more upside potential. It is now at the same level as it was in 2002 before the start of the last resources boom. Most commodity prices (except for iron ore) have been depressed for years because of over-supply, so they have considerable upside potential individually: the prices of strategic minerals and agricultural commodities could easily double from current levels. Commodity price rises feed very directly into inflation by raising manufacturers’ raw material costs.

There is an additional inflationary driver which will also raise manufacturers’ costs. Semiconductors – the tiny silicon wafer chips which are essential for phones, computers, cars and all other electronics – are in short supply worldwide. 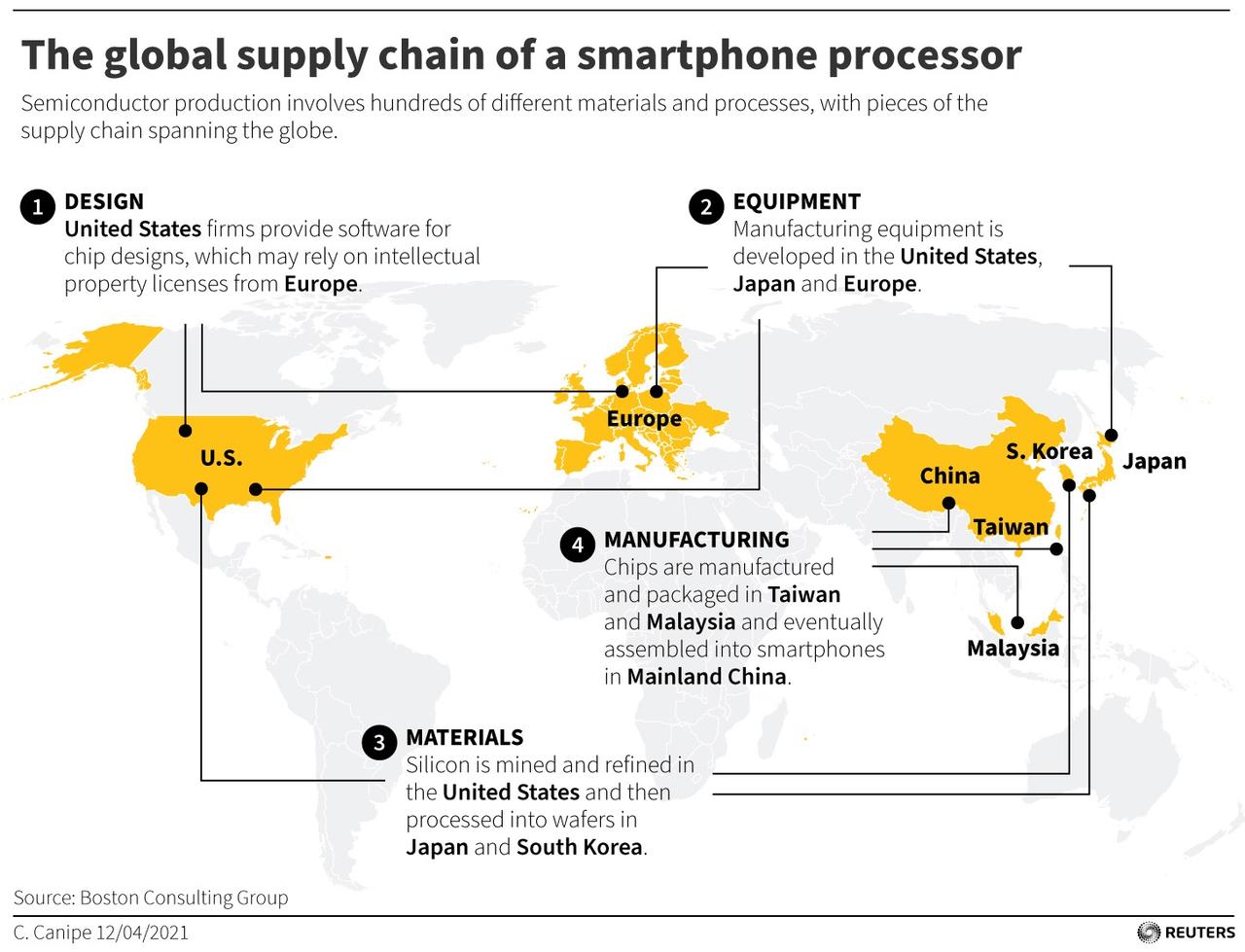 The shortage began when the Trump Administration prevented Chinese companies from buying critical US patented technologies, including semiconductors. Not surprisingly, many Chinese companies started stockpiling semi-conductors as a precaution, and other companies followed suit.

The semiconductor shortage worsened when the rapid US economic recovery in the last six months brought a surge in consumer demand, which encouraged retailers to rebuild their inventories and manufacturers to increase production. Very soon, the mostly Asian makers of semiconductors reached their capacity limits, so they increased prices, lengthened delivery times, and rationed new orders. Because new semiconductor capacity is expensive and takes at least two years to build, the semiconductor shortage will last until 2023.

Last but not least, China. Chinese manufacturers face the same commodity price rises and semi-conductor shortage as the rest of the world, but there is also a political twist. Any retailer can tell you that imports from China have had a deflationary effect of consumer goods prices ever since China was allowed to join the World Trade Organization in 2001. As “the world’s factory”, China had lower input costs and lower labour costs, not to mention national and provincial governments which actively encouraged the creation and expansion of export industries.

In recent years, however, the situation in China has changed. First, China’s working-age population (those aged 16 to 59) has been falling since 2012, and average wages in China have been rising faster than GDP and inflation.

Second, new entrants to the labour force are no longer the country boys and girls of the 1990s, who hadn’t finished high school and were willing to work long hours in poor conditions. The new generation born in the 1990s is better educated, has higher expectations, and knows how to exploit its bargaining power. No more cheap China!

Third, the 14th Five Year Plan for 2021-2025 de-emphasizes manufacturing exports in favour of domestic consumer demand, and it prioritizes investing in high tech industries. These objectives reflect what is happening on the ground: labour-intensive industries (e.g. textiles) have been moving from China to cheap-labour countries like Vietnam, Indonesia, Malaysia and Bangladesh.

Fourth, Xi Jinping has committed China to peak carbon emissions by 2030 and carbon neutrality by 2060. Conclusion: China is no longer a deflationary force.

In June 2020, when we started predicting higher inflation in the US, we thought that it would only spread very slowly to other countries, because the US dollar would fall against currencies such as the Australian dollar. We still expect the US dollar to fall, but recent trends in global inflation drivers –commodity prices, shipping delays, semiconductor shortages, and China – imply that inflation will be a global phenomenon. 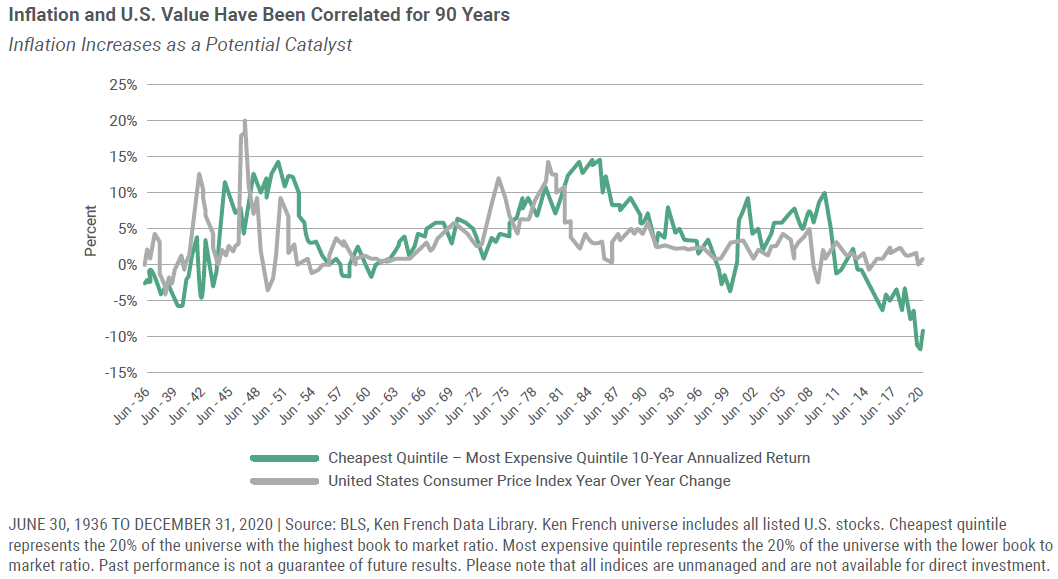 What sort of stocks do well in times of inflation? The chart above shows how rises in inflation (grey line) have been correlated with higher share prices for value stocks (green line) since 1936.

Value stocks are companies trading on lower price-earnings ratios (P/E) than the market average; they are often cyclicals, and usually in sectors such as banking, mining, energy, building materials, manufacturing and industrial supplies. As a class, value stocks underperformed the market from 2008 to 2020, but they have picked up dramatically since the vaccine good news of November 2020.

What should Australian investors do to prepare for inflation?