IF CHINA REBOUNDS, AUSTRALIA GETS AN ASSIST

China is a major factor in Australia’s economic recovery because China buys more than a third of our exports. This is why global investors like to use the Australian dollar as a proxy for the Chinese economy – if China does well, Australia will benefit, so our dollar will rise (provided that the Australian government does not provoke any more trade retaliation).

August marked a sharp improvement in China’s economy. Exports leaped 9.5% year-on-year, after a 7.2% rise in July. The rapid resurgence is partly due to Western companies re-stocking their supply chains after the COVID-19 disruptions of the first half of the year. It is also due to Western consumers’ recent spending spree on electronic goods for entertainment or home offices.

Retail sales rose 0.5% compared with August 2019 – the first year-on-year increase since the coronavirus arrived. The August increase was higher than the consensus forecast, and far better than July’s 1.1% contraction. For the eight months of 2020 so far, retail sales are still down 8.6% compared to the same period of 2019, so the economic recovery is far from complete. 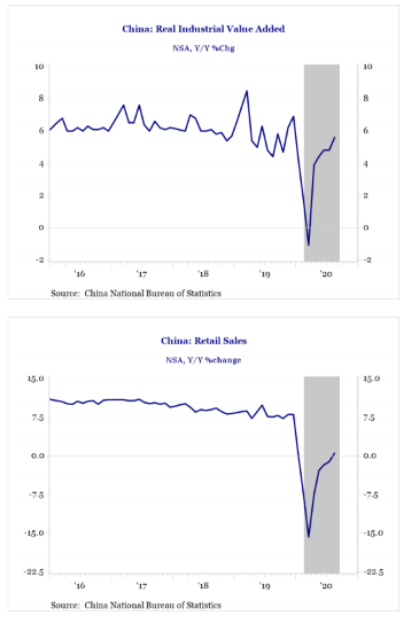 Industrial production in August rose 5.6%, much faster than retail sales. As the charts above show, the industrial sector has picked up much more strongly than the retail sector, and is now up 0.4% compared to January-August 2019. Property investment has recovered even more strongly – it is now up 4.6% year-to-date. The magnitude of the stimulus to the property sector can be seen in the number of excavators sold, which soared 51% in the first eight months of 2020.

Industrial production and property investment have enjoyed aggressive government stimulus programs. The ordinary Chinese consumer, on the other hand, has not been given the kind of income support handed out by Australia and other Western governments. Less than half of urban workers are entitled to unemployment insurance. It is also worth remembering that the median Chinese household has less than a quarter of the wealth or income of the median Australian household, so it is not surprising that consumer spending is still very cautious in the wake of the job losses inflicted by the lockdowns.

This is why China currently has a 2-speed economy – industry in the fast lane and consumers in the slow lane. Unless consumer demand picks up soon, Chinese manufacturers will find themselves with too much inventory, so they will have to cut production in order to reduce over-stocking. 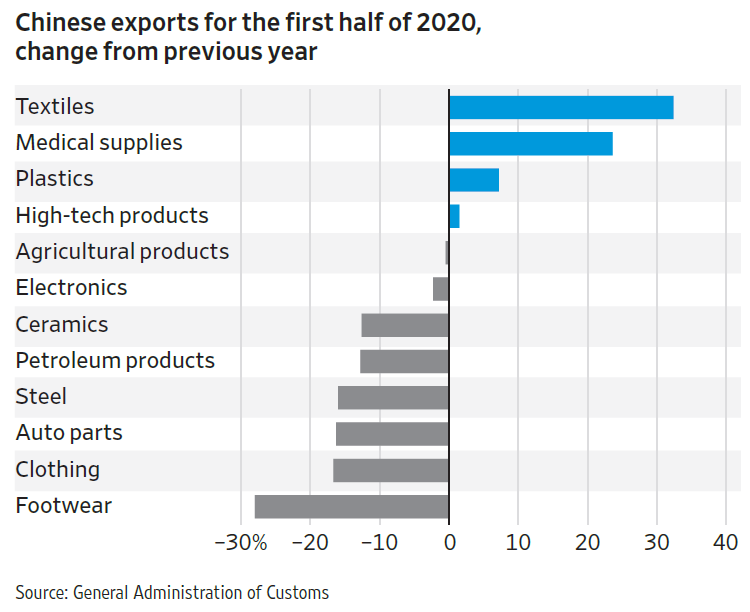 Food supply is also a problem. The coronavirus lockdowns disrupted production, transport, and processing throughout China from January to May. Since then, typhoons have battered the coastal provinces, while the Yangtze floods have damaged crops in major agricultural regions. Farmers are reported to be holding their grain back from the market in the expectation of higher prices in the near future. The central government sold off most of its pork reserves to fill the shortages caused by African Swine Fever, so that it is now importing record volumes of pork from the US, as well as wheat, corn, and soybeans.

Meanwhile, the Chinese financial system is still subject to the fundamental weaknesses which we have been talking about since January 2019. Before the coronavirus, about 10% of small banks failed last year’s stress tests. Corporate borrowing is dangerously high in sectors such as property developers, and corporate bond defaults are increasing. The COVID-19 lockdowns imposed immense strains on vulnerable businesses – e.g. those dependent on consumer demand rather than government contracts. Since the lockdowns, the supply of credit has been pumped up, and the regulators have told the banks in no uncertain terms to hold off on receiverships and foreclosures, but the underlying problems have not gone away. At least one major property developer is rumoured to be on the verge of collapse.

The Chinese yuan has strengthened against the US dollar and other currencies because the Chinese economy came out of lockdown faster and stronger than the US and Europe. The Shanghai stock market is up 4% year-to-date, putting it far ahead of most Western share markets; recent IPOs have drawn in a flood of speculative money. Chinese bonds actually offer positive yields: the benchmark 10-year Chinese government bond is currently yielding 3.13%, compared to 0.67% for its US counterpart (not to mention the negative yields in Japan and much of Europe).

Thus the Chinese government faces a policy dilemma: it needs to encourage the household sector to spend, while at the same time avoiding asset bubbles in the financial sector. If the government fails, it will not be for want of trying: the response to COVID-19 has included reforms to State-owned enterprises, loosening foreign ownership rules, creating new free-trade zones, and removing bureaucratic red tape for private businesses. At the same time, the government has accelerated technological development in its priority fields such as semiconductors and artificial intelligence.

The history of the last forty years suggests that China can continue its record of economic growth, if at lower rates – perhaps 5% per annum. The COVID-19 crisis showed that a command (communist) economy has its uses for at least its own population, and the Chinese government has two major advantages in sustaining the economic recovery. First, its level of government debt is low (unlike the US). Second, its level of household debt is low (unlike Australia, see graph below). Therefore, China has a lot of room to manoeuvre in pumping up the economy. 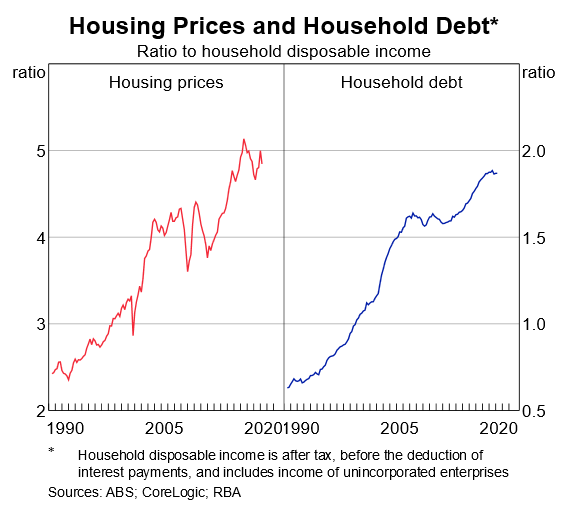 The balance of probabilities suggests that the Chinese economy will continue to recover. The Golden Week holiday, which is just about to start, will be a good test of consumer sentiment. Over the next five years, success in China means success in Australia – a return to economic growth with low inflation and low unemployment. It also means a rising Australian dollar.