HOW BAD WILL THE COVID-19 RECESSION BE?

EPIDEMICS – A NATURAL PART OF LIFE

If there were no quarantines, lockdowns, vaccines or cures, the COVID-19 epidemic would keep on spreading through the population until everyone susceptible to it had been infected. This was how almost all the epidemics in human history played out until about 1850, when scientists began to understand how diseases spread and how they could be treated.1

The percentage of the population that gets infected is called the disease’s morbidity rate. The average number of people whom an infected person transmits the disease to is called the basic reproduction number (r0). If r0 is greater than 1.0, the disease is still spreading. Out of those infected, a certain percentage will die – this is called the case fatality rate. These numbers are not fixed: they vary across time and place, depending on disease mutations, population health, community hygiene, climate, trade patterns, and many other factors.

COVID-19 has a high morbidity rate, a fairly high basic reproduction number, and a low case fatality rate. In laymen’s terms, this means that – if nothing were done to prevent it – 30% to 60% of the population would contract the disease over a few years, but out of every hundred infected persons only one or two would die of it. As such, it is less harmful than the great plagues of history. For example, the Black Death, which hit Europe around 1350, killed one-third to one-half of the population within a decade.

Applying these numbers to Australia’s population of 25 million suggests that up to 15 million people could catch COVID-19 and up to 150,000 could die. Fortunately, governments can introduce measures which will slow the spread of the disease, i.e. reduce the basic reproduction number and the morbidity rate.

The communist government of China has just demonstrated that a combination of mass testing, isolation, contact tracing, lockdowns and quarantines could restrict COVID-19 to the area around Hubei province and could prevent community spreading in the rest of the country. Welding the doors shut on apartment blocks has assisted also. China stopped the spread of COVID-19 at the cost of stopping the Chinese economy from late January to early March – a period of six weeks. The government is now trying to restart the economy without restarting COVID-19. It can probably do so by late May, although it will be hampered by the economic downturn which the epidemic has caused in much of the rest of the world. In addition, the government may have to re-impose local lockdowns and quarantines if COVID-19 is re-introduced by “infected foreigners” (as the Chinese are now referring to anyone who is not Chinese).

There are numerous economic studies of the cost of epidemics past and present2. None of them, however, include estimates of the economic impact of the sort of quarantines and lockdowns which are being employed to cope with COVID-19. The most recent envisages seven scenarios of varying severity: the worst implies that 2020 GDP will fall by 6% in China and by 8% in Australia and the US, with similar falls in other major economies.

Western economic analysts believe that China suffered negative economic growth in the March 2020 quarter. They estimate that GDP fell by 5% to 11%. Because of the political importance of Chinese growth figures, official statistics have not been closely connected to reality in the past, and the government may decide to continue its tradition of fantasy numbers.

Regardless of what the official figure turns out to be, contemporary evidence suggests that for about six weeks the Chinese economy was functioning below 60% of capacity. The Financial Times chart below measures China’s economic activity in the first three months of 2020 versus the same period in 2019. The size of the downturn is obvious. A similar picture is evident in the National Business Activity Index prepared by the China consultancy Trivium. 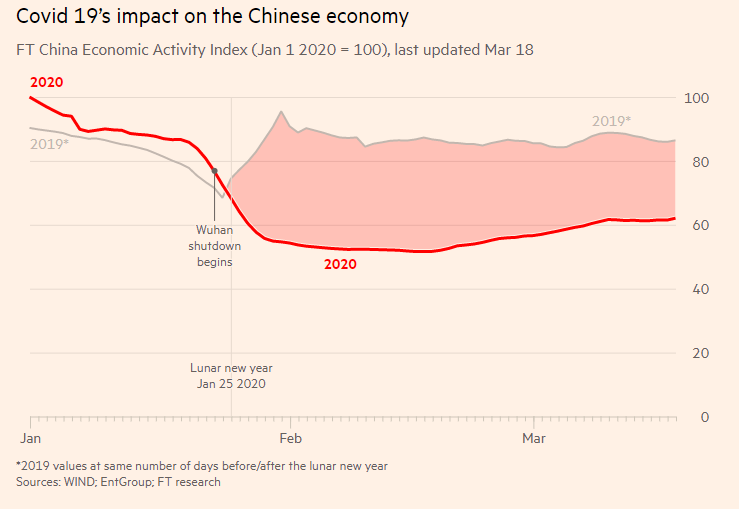 Many Western governments are currently trying to repeat the authoritarian Chinese policies. They are finding it difficult, partly because their citizens are not good at obeying orders, and partly because they lack the powerful and ubiquitous security apparatus which is an intrinsic part of the Chinese communist state. Populations of Western democracies could reliably be expected to react poorly to being quarantined by way of having the entrance doors to their apartment buildings welded shut. As an example, the Chinese authorities were able to prevent COVID-19 from spreading because they immediately assembled a team of 9,000 people dedicated to tracing the contacts of all the infected persons in the Wuhan area. Furthermore, all the municipal governments across China enforced their own rigid restrictions on travel into or out of their jurisdictions.

Some governments have already managed to cut the growth rate of infections by early and effective action. Singapore, South Korea and Taiwan had developed comprehensive epidemic control plans in the wake of the SARS epidemic, and they put these into effect immediately.

By contrast, due to the mismatching powers of the individual states and the federal government, the US has been unable to act quickly, failed to apply its own biodefense security plans, and failed to provide nationwide control measures of any sort. The self-governing powers of the individual states in America is markedly different to individual states’ power in, for example, Australia – where the policy response has been primarily coordinated by the Federal government. Consequently, the US response to COVID-19 has been piecemeal, as city, county and State governments applied a patchwork quilt of unco-ordinated and inconsistent policies. The price that the US will pay is twofold – a higher morbidity rate (because community spreading is now rampant), and a higher case fatality rate (because hospitals are under-resourced and will be overwhelmed). Because COVID-19 will be more severe in the US, the economic cost will be greater, resulting in a recession which is longer and deeper than it need have been. If China had notified the rest of the world in a more timely manner as to when it first discovered the virus, the current global predicament and the decidedly sub-optimal outlook for 2020 would be materially different.

The response of the Australian government has been better than the US, but not as good as Singapore, Taiwan, or South Korea. Australia does have some advantages: lower population densities make social distancing easier to accomplish, long-distance movement is not difficult to control, and the hospital system is world class, with more beds per capita than the US or China.

We expect that the policies applied by Federal and State governments will cause a recession, i.e. at least two consecutive quarters of negative growth. The Chinese economy was running at less than 60% capacity for six weeks, and it will not be fully functional until at least May, implying a total of thirteen weeks of subpar performance. The Australian shutdown is only just beginning, and it will last longer than the six weeks required for the Chinese shutdown because it will not be as tightly controlled. It is likely that the Australian shutdown will run for ten weeks from end-March to early June, effectively plunging the June 2020 quarter into recession. The economy may already have slipped into recession in the March 2020 quarter, given that GDP growth in the December 2019 quarter was an anaemic 0.5%.

Fortunately, the Australian recession will not be as deep as China’s economic downturn, because the Federal and State governments have provided better social safety nets and more government spending. In addition, the geographical dispersion of Australian economic activity means that less of the economy will come to a halt. Therefore the time to recovery should be about as fast as the ten weeks which we have estimated for China’s recovery. If the Australian shutdown ends in early June, the Australian economy should be mostly back to normal by late August. This forecast implies negative year-on-year growth in the September 2020 quarter too. The unemployment rate is expected to peak above 8.0%.

There will, however, be permanent damage. The airline, travel, and tourism industry will take many more months to recover, because their recovery depends on how long COVID-19 is prevalent in the rest of the world. The oil industry was suffering from low prices even before the Saudis and the Russians started their price wars. The banks will face a surge in bad loans despite the business support schemes, and the consequent loan write-offs will force the banks to cut their dividends. Furthermore, one element of the Federal Government’s stimulus package harms the banks’ lending business: with the official cash rate at 0.25%, the banks’ net interest margins will be under more pressure, and depositors will be looking for alternatives which offer higher interest rates.

The rapid spread of COVID-19 in Europe suggests that recessions there will be deeper and longer than in Australia or China. The US, however, appears to have the worst outlook because its response to the epidemic has been slow, piecemeal, and disorganized.

In 2019 the GDP of the US economy was approximately USD 21.4 trillion, about 15 times the size of Australia’s economy. Estimates of the reduction which COVID-19 will cause in June quarter GDP are diverse, e.g.:

What is clear is that the impact will be serious, leading to a recession lasting two or three quarters3. We agree with the prognosis of the hedge fund Bridgewater, which expects US corporate revenue to shrink by USD 4 trillion over CY2020. A decline of this magnitude means that US demand for importing goods and services from the rest of the world will shrink, causing problems for economic recovery in Australia, China, and Europe.