It is natural to assume that a country’s share market performance is driven by its economic performance, and therefore that a country with high GDP growth will generate high equity returns. Unfortunately, completely the opposite is true. For most countries over most periods, equity returns are negatively correlated with economic growth. How could this happen?

We have known for four decades that share markets are much more volatile than they ought to be if their price movements were driven by changes in economic and business fundamentals alone. Robert Shiller pointed out in 1981 that, based on price and dividend data since 1871, share price volatility was more than five times the level you would expect if prices responded only to new information about future dividends or real interest rates. This conclusion suggested that more than 80% of share price movements were mere noise, unrelated to fundamental information. Or, as Paul Samuelson joked, “The share market has predicted nine of the last five recessions.”

Knowing that share prices are mostly noise helps us to come to terms with the counter-intuitive fact about share markets – that countries with high rates of GDP growth do not generally have high share market returns. Consider the chart below from GMO (Inker 2016), which plots GDP growth against equity returns for 16 developed countries over the period 1980-2015. If high GDP growth led to high equity returns, all the country data should lie close to the 45-degree line. Obviously, they don’t. The data are all over the place. 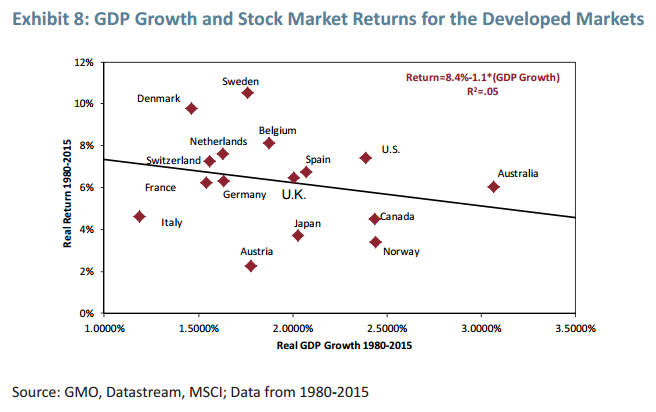 This is not an isolated result. Several studies of different countries over different periods have produced the same conclusion: high GDP growth is totally uncorrelated to equity returns, and may even be negatively correlated. (See for example Dimson et al 2002, L’Her et al 2018, MSCI Barra 2010, Ritter 2005.) The table below from MSCI Barra shows detailed country by country figures for real GDP growth, real equity returns, real EPS growth, and PE change over the period 1969-2009. Again, the figures are all over the place.

There are very good reasons why a share market might not match the performance of its domestic economy. The first is that share markets do not usually reflect the composition of the local economy. The fact that a multinational company is listed on a country’s share market does not mean that it has much to do with that country’s economy. In the US, for example, about 35% of the revenue of the companies in the S&P500 index is earned outside the US.

This type of situation reaches an extreme in Switzerland, where the 8 million Swiss citizens contribute very little to the revenues of Swiss multinationals such as Nestlé (market value $430bn), Novartis (market value $290bn), and Roche (market value $301bn). For comparison, the market values of BHP and Commonwealth Bank are $111bn and $137bn respectively.

A second reason is that equity returns depend on the starting valuation of the share market. If an investor puts her money into an expensive market, the initial returns may well be negative. Investors who bought US shares just before the 1929 crash had to wait until 1952 before they broke even, let alone achieved positive returns.

Empirical research shows that investors tend to stampede like cattle into hot stocks and hot markets. They overpay for growth far into the future, in the sense that they expect company earnings growth to be higher than it actually turns out to be, so that a share price correction is inevitable when the truth hits home.

But the most compelling reason is that equity returns depend on the supply of shares. If new equity is raised and new companies are listed, the benefits of higher economic growth are diluted by being spread across more and more shares. According to L’Her et al 2018, it is this supply factor which explains the spectacular performance of US equities in the last decade. US companies reduced the supply of shares by buying back USD 4.7 trillion of their own shares between 2009 and 2018. By contrast, the capitalization of Chinese share markets grew by an average of 27% per year between 1997 and 2017, and the performance of Chinese shares was correspondingly poor.

The lesson for the investor is simple. Favourable economic conditions are a positive factor, but they do not by themselves guarantee high returns from equities.

MSCI Barra. 2010. “Is There a Link between GDP Growth and Equity Returns?” MSCI Barra Research Bulletin, May 2010.

Shiller, R. 1981. “Do stock prices move too much to be justified by subsequent changes in dividends?” American Economic Review 71:421-436.