The Commonwealth Bank of Australia (“CBA”) is Australia’s largest bank at $140.6 billion, and the most expensive of the Big Four, in terms of P/E, dividend yield, and price to book ratio. As such, its disappointing result for the year ended 30 June 2019 does not augur well for the other three big banks (who all have September year ends).

Provisions were mostly related to CBA’s obligation to remediate customers in the wake of the Hayne Royal Commission. An extra $0.918 billion in this result took the total to $2.2 billion, and more will follow next year. The remediation problem is finite, however: eventually CBA will have repaid all the customers whom it has cheated and maltreated. The bank’s other problems may just keep on keeping on.

Operating expenses jumped 13% in FY19 as CBA hired extra staff to handle the remediations and to set up the new systems which will meet post-Hayne standards. We know that banks can achieve this, because Macquarie sailed through its Hayne testimony. Macquarie had learned from the Enforceable Undertaking which ASIC imposed on its Private Wealth operations in 2013, and cleaned up its people and its processes. Macquarie, however, is a lot smarter and smaller than the Big Four, who may well take longer to get their act together.

The Big Four banks are also facing increased competitive pressure in their lending businesses. In consumer loans, shadow banks such as Latitude are advertising heavily. In corporate loans, hedge funds and investment funds are actively pursuing better-quality borrowers. On top of this, the online-only neobanks are targeting bank customers, offering quicker and simpler approvals and better rates (if you are the right sort of borrower).

“Troublesome and impaired assets” (the banking euphemism for loans that are going bad) rose by $1.1 billion to $7.8 billon, caused by weakness in the consumer discretionary (mostly small retailers), agriculture, and construction sectors, as well as some corporate exposures. This is not good news for the other banks, all of whom have very similar loan books.

The biggest problem for the banks is falling interest rates, because of their effect on net interest margin (“NIM”), which is the spread between the average rate banks lend at and the average rate they borrow at. The NIM is important because lending is the core business of all the banks. According to CBA, the Reserve Bank’s two 25 basis points (0.25%) rate cuts in June and July will reduce net interest margin by 4 basis points, from 210bp (2.10%) to about 205bp (2.50%). This will reduce earnings by a quite material (estimated) $344 billon.

Bond investors are factoring in further rate cuts in FY20: the benchmark 10-year bond yield has already dropped below the official cash rate of 1.0%. CBA noted that, out of the bank’s $630 billion in deposits, there were $130 billion where it was not possible to pass on a rate cut in full or at all. In addition to reducing bank profits, low interest rates also encourage depositors to go elsewhere in search of higher yields – a mass exodus of small customers would damage the banks’ deposit base and raise their funding costs.

We do not believe that there is about to be another GFC.

APRA (https://www.apra.gov.au/about-apra) has succeeded in its objective of making the Australian banks “unquestionably strong”. CBA, for example, has $3 billion or more of surplus capital which might get handed back to shareholders next year. What we are saying is that the banks are likely to become less profitable in FY20 and FY21 – even without a US-China trade war, a US recession, or negative interest rates. 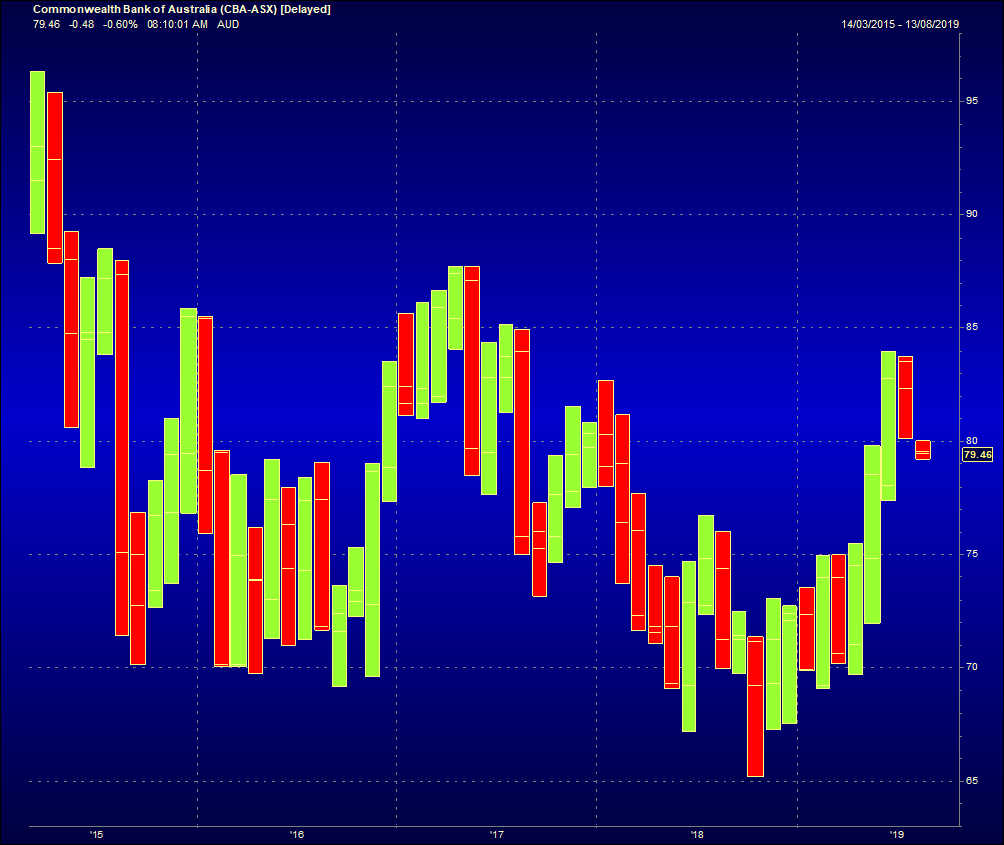