China is recovering, not only from COVID-19, but also from the GDP collapse caused by its lockdown. We know this because the central government has begun to relax several key restrictions on travel and spending.

First, China’s children are being allowed to go back to school. All provinces are phasing in the resumption of regular classes over the next six weeks. In the land of the one-child policy, the return to school is psychologically very important. Even though COVID-19 very rarely kills young people, no Chinese government wants to be responsible for any child mortality. Remember the 2008 scandal about melamine infant milk formula? Reports cite that 12 children died with 300,000 falling ill. A mayor and local party boss were sacked; China jailed 19 people and 2 men were executed. Who knows what the real totals were.

The resumption of classes also increases the risk that COVID-19 will spread more freely among adults, increasing the risk for likely victims such as the elderly. Therefore the return to school is a strong indication that the Chinese leadership are confident that their public health system can rapidly identify and control any outbreaks.

The second strong indication is that China’s “Parliament” – the National People’s Congress (NPC) – is scheduled to begin its annual meeting on 22 May. Even though the NPC obediently rubber-stamps every proposal put in front of it, its meetings are a big deal in China’s political and propaganda calendar. The Chinese leaders all submit their “work reports” (what they did last year) to the NPC, and the NPC is the stage where they announce new policies and set their programs for the coming year. Along with the Chinese People’s Political Consultative Conference (CPPCC), the NPC usually meets for two weeks in early March. For obvious reasons, this year’s meeting was postponed.

Because the NPC meeting is always a huge media event, the leadership was never going to downgrade it to a virtual meeting like a giant Zoom call. The NPC has nearly 3,000 members. Even though they are unpaid, being elected as the member for your local area is immensely prestigious. Holding the NPC meeting while COVID-19 was running wild could have killed off the first, second and third tiers of party members and bureaucrats. Holding the NPC meeting in May shows that the top leaders are no longer too worried about an outbreak. (Nonetheless, very few NPC members will want to hang out with the delegates from Wuhan.)

The third strong indication is that the authorities have relaxed the travel and quarantine restrictions for Beijing and nearby regions. These restrictions have been in place since the nationwide lockdown was imposed in late January. Other provinces have already relaxed their restrictions, but Beijing is not only the national capital and the centre of government (like Canberra), it is also where the top leaders live all year round (unlike Canberra). Because a COVID-19 outbreak in Beijing could have killed off the top leaders (who are almost all over 60), public health control was rigidly enforced. Relaxing the restrictions means that the top leaders are no longer too worried about getting infected.

As the threat of COVID-19 recedes and the authorities lift restrictions, the Chinese economy will recover – but not as fast as investors are hoping. The social lockdown forced about one-third of the economy to stop dead: in the March quarter, GDP fell by -6.8%, the profits of industrial firms dropped by -36.7%, and nearly half a million small firms went out of business. Reputable data sources (i.e. not official Chinese data releases) place unemployment at approximately 20%. The enforced isolations and business closures have slashed the incomes of many people, as well as using up household savings and pushing many firms to the edge of insolvency. The policy makers are well aware that there is no light switch to turn the economy back on again.

According to the National Business Activity Indicator published by the China consultancy Trivium, the Chinese economy is now operating at 82.8% of typical output. Trivium also pointed out that the first part of the ramp-up was relatively easy – the hard part will be to get near 100% again. The Financial Times publishes a China Economic Activity Index (see the chart below) which suggests the same conclusion. The bright red line showing 2020 economic activity is moving steadily upward, but many segments of the economy are still weak. Container freight movements are only just picking up, and the skies above China’s cities are still blue. Clear skies and breathable air are negatively correlated with Chinese economic activity. 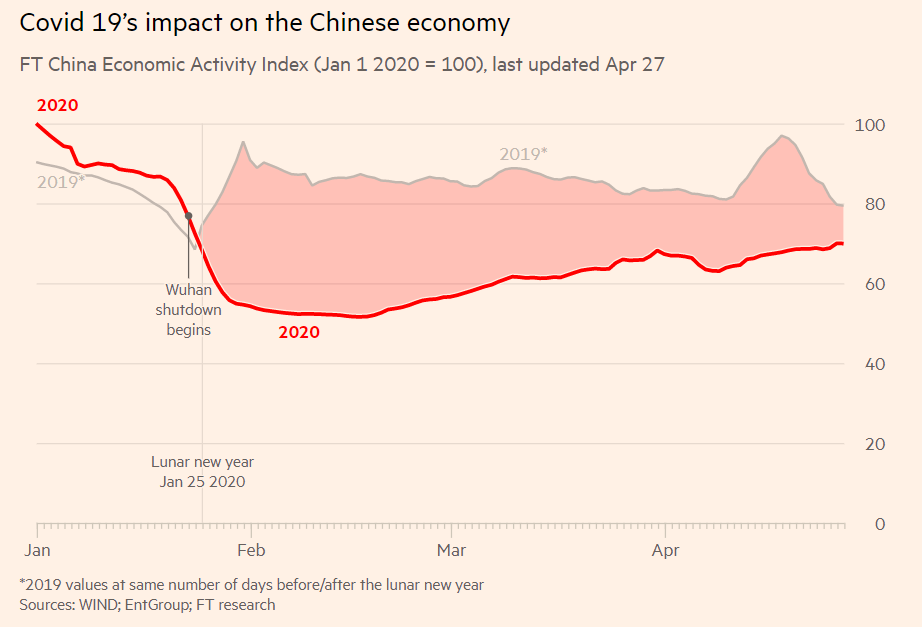 The recovery faces three major obstacles. The first is access to credit. The big Chinese banks have never liked lending to small and medium enterprises (SMEs). Right now they are paying lip service to the Party leaders’ exhortations to fund SMEs, but the bulk of new credit is going to large private firms and to State-owned enterprises… as usual. The banks used to channel funds to SMEs via their pet shadow banks (e.g. trust companies), but the regulators’ campaign to de-risk the financial system has slashed the shadow banks’ lending over the past three years.

The next major obstacle is consumer confidence, which is still damaged. The official unemployment rate of 5.9% only covers cities, thereby excluding 41% of the population. Even in the cities, the unemployment rate does not count the 200-million-plus migrant workers. The true unemployment rate is far higher. Bloomberg news services in April published a broker report which cited the real rate as 20% unemployment, but the Chinese authorities forced the brokerage to retract the report, so it has now disappeared from the news wires (in China, not the West). Even those who still have jobs are cautious about their spending, in case the recovery does not last. Many consumers will also be wary of rushing back into shops and restaurants for fear of infection. Provincial and city governments have been handing out vouchers to residents in the hope that they will spend them in local businesses, but many residents say that they are using the vouchers but saving their cash, with no net increase in spending.

The final obstacle is lack of export demand, because lockdowns in the US, Europe and other countries have temporarily destroyed demand for Chinese goods. This is an area where government spending on contracts and infrastructure can make a difference, at least in the short term until other economies recover.

We estimated that March quarter GDP would fall by -7.0%, which was not far from the actual outcome of -6.8%. For the June quarter, we are looking for +3.0%, which is more optimistic than the median forecast of 1.3%. But after that we expect the recovery to fall short of a return to normal: growth in the December half-year is expected to be 5.0%, compared to the 6%-plus of recent years. The key indicators to watch for improving consumer confidence are:

Economic patient zero is recovering, but no-one is immune to a relapse.