Last November we said that the big four banks were on the road to recovery, and recommended that investors hang onto the banks as a leveraged play on Australian growth in 2021. Over the last six months the banks’ share prices rose by 35% or more: now the question is, can they keep on out-performing?

Australian investors have come around to the belief that our economy is on a smooth path to recovery, so they expect bank earnings to recover in line with the economy. Consensus forecasts imply that, after their FY21 rebound, bank earnings per share will grow by less than 10% in each of the next two years. Dividend payouts will not return to their pre-pandemic levels of 75%-plus, so dividend yields will grow very slowly from their FY21 levels of 4.5% to 5.0%.

The banks are simply not as profitable as they used to be, because of higher capital requirements and increased competition in key areas. A decade ago, 20% returns on equity were common; by contrast, in the next couple of years CBA will earn about 12% and ANZ, NAB and Westpac 9% to 10%.

The changed environment is reflected in the banks’ dismal share price performance from 2015 to 2020 as seen in the graph below. CBA alone has just beaten its 2015 share price peak; the other three are still about 30% below their 2015 peaks. The “new normal” after COVID-19 will not be much better for the banks than the old normal before the pandemic. 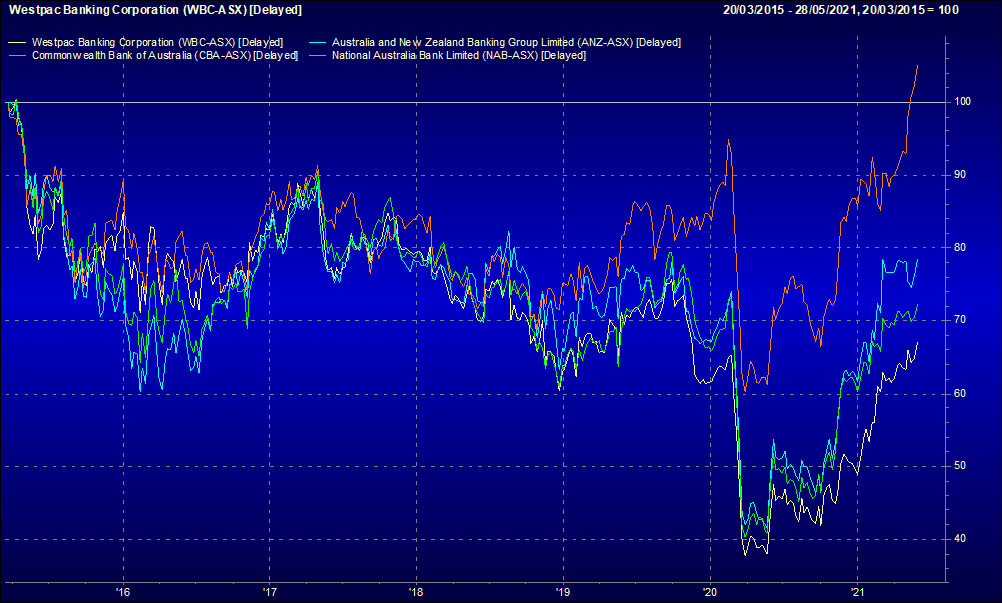 In the longer term, the banks still face the four strategic threats described on our 22 July 2019 paper (available on the Arminius website): higher standards, cryptocurrencies and payment systems, fintechs and neobanks, and ultra-low interest rates. The pandemic diverted attention from these threats, but the threats are still there.

We believe that the combined effects of these threats will erode the banks’ growth rates over the next five years, with the result that their total returns will be about 1%pa below the 10.2%pa long-term return of the Australian share market.

The banks have already remediated almost all of their customers and updated their systems to cope with higher regulatory standards. Their CEOs have begun to lay out their post-pandemic strategies, and it is clear that they are based on very different visions of the future of banking.

We do not regard cryptocurrencies as a threat to the standard banking model, partly because acceptance is limited to the true believers, and partly because the regulators have barely started to supervise the sector. Payment systems, however, are undergoing dramatic changes which could change the banking model over the next five years. In particular, all of the major central banks are now looking at issuing their own digital currencies, and some of them may copy the Chinese model.

The pandemic killed off some of the weaker neobanks and fintechs, but the stronger players (e.g. Judo) have survived and are winning market share. Ultimately, their owners will probably succumb to the temptation to sell out to the big banks, but over the next few years they will nibble away at the incumbents’ margins, in the same sort of process that we have seen in other disrupted sectors such as airlines and telecommunications.

Ultra-low interest rates are not a permanent feature of the Australian financial landscape, and the Reserve Bank’s response to the pandemic included assistance to the banks. It is likely that the strength of the recovery, the jump in house prices, and the emerging inflationary pressures will encourage the Reserve Bank to begin raising official interest rates sooner than the market is expecting.

In addition, there is the challenge issued by the Reserve Bank of New Zealand. During the GFC, the Kiwi regulators could hardly fail to notice that the Australian banks operating in NZ made decisions to suit their Australian regulators and shareholders, without regard to their Kiwi stakeholders. The RBNZ has told the banks that it wants much higher capital ratios in their NZ businesses, ring-fenced so that Kiwi stakeholders come first. The Aussie banks must either comply, and see their Kiwi return on equity drop, or they must divest their NZ businesses.

Most importantly, the big four Australian banks are no longer cheap. In terms of price-earnings ratios and price-to-book ratios, they are more expensive than most banks in the developed world, even their much stronger US counterparts.

All data is in local currency terms. Blue data points are country level section averages, with the exception of Mkt Cap which is a sum total.

They are also slightly expensive relative to their own history. Relative to the Australian market, however, they are still slightly cheap, and their strong capital positions leave room for share buybacks. Therefore we recommend that investors maintain their bank holdings, at least until the next set of results in November.